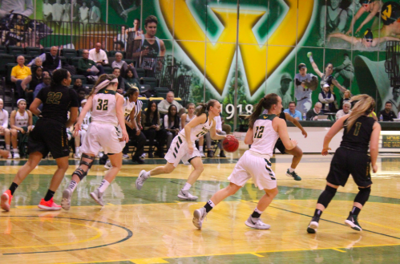 It took WSU just six seconds to score the first points of the game as a layup by senior guard Nastassja Chambers gave the Warriors the early lead.

Chambers and senior guard Sadia Johnson combined to score 17 of WSU’s first 20 points as they held a 20-12 lead halfway through the opening period.

The Lakers outscored WSU 8-4 to end the stanza, cutting the Warriors advantage to 26-20 after the opening quarter.

WSU opened the second period on a 15-0 run to take a 41-20 lead halfway through the quarter. The Warriors held WSL scoreless for over eight minutes before a made basket cut the Warriors advantage to 41-22 late in the first half.

WSU outscored the Lakers 10-2 to end the half and take a 51-24 lead into the intermission. After the break, WSU’s lead never dipped below 20 points as they outscored WSL 37-22 in the second half to seal the victory.

Head coach Carrie Lohr said she wanted the team to build an offensive identity off the fast break and doing so is something they consistently focus on.

“We want that to be our offense, so that is something we definitely practice every single day,” Lohr said.

Matus said she was excited to reach the accomplishment, while crediting her teammates for assisting her along the way.

“I couldn’t have done it without my teammates,” Matus said. “Stassj (Nastassja Chambers) and Sadia (Johnson) both help suck defenders in the lane and pass it right out and even our post players Sam (Cherney) and Tori (Perez) do a really good job of looking for our shooters.”

Matus said the team established a strong bond throughout summer workouts and the senior group has become closer because of that.

“I think it goes all the way back to our first day of summer workouts (and) I think the senior group with Lyndsey (Matus), Sadia and Stassj, we’ve stressed that we want to be best friends on the court and off the court and I think that definitely correlates,” Matus said.

The win extended WSU’s winning streak to four games and improved their record to 4-1 on the season.

WSU returns to the Matthaei to face Tiffin University in a non-conference matchup Nov. 26 at 7 p.m.

Jonathan Szczepaniak is a contributing writer for The South End. He can be reached at gj3693@wayne.edu