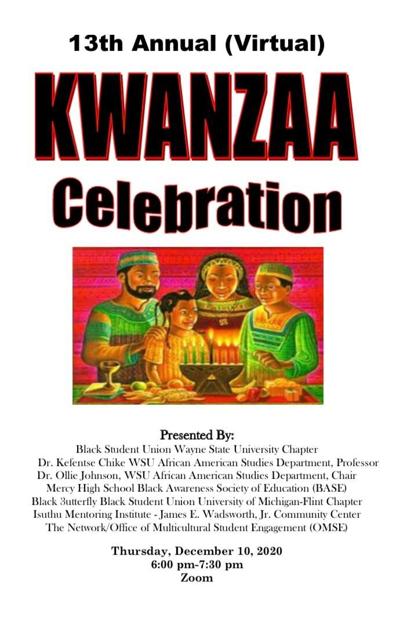 Kwanzaa was inspired by the Swahili phrase "matunda ya kwanza" which translates to “first fruits,” according to History.com. It was founded in 1966 by Dr. Maulana Karenga to bring African Americans together as a community and is held from Dec. 26 until Jan.1. Kwanzaa celebrations often include songs and dances, African drums, storytelling, poetry readings and a large traditional meal.

“I am somebody. My mind is a pearl to learn anything,” Wheeler said. “I'm awesome. I am intelligent. I am unapologetically Black. I am somebody. Who I am is my gift from God. Who I become is my gift to God. I am powerful. We are powerful."

Students shared the meaning behind each principle through presentations, artwork and storytelling.

WSU social work graduate student AeYanna Yett said the first day of Kwanzaa is “a day of togetherness to share feelings for each other."

WSU community members are participating in the principle of Ujima by coming together to celebrate the holiday, said the Brotherhood advisor Mark Johnson.

“We are coming together on campus and building a community. Our ultimate goal is to come together and graduate. We want to see all our brothers and sisters graduate,” Mark Johnson said. “We have collaborated as a brotherhood and as a network and then we're all reaching back and supporting our community so we can continue to grow together as one.”

“We have taken a three part approach to approving the Black dollars and Black businesses,” Taylor said. “Since 2018, our chapter has been encouraged to shop, and we’ve tracked over $300,000 spent at Black-owned businesses. We also launched the Black Business Directory to give visibility to local areas of Black owned businesses and the second edition is launching with 125 local areas.”

The seventh principle, Imani, was presented by Deaunai Montgomery, a member of the Black Campus Ministries.

“Imani is our belief in our parents, teachers, leaders and the righteous and victory of our struggle,” Montgomery said. “When I think about faith, I think of God doing the impossible. I think of believing in something being done or achieved that we can't foresee. I think of every Black person struggling form systemic racism, undressed rulings and discrimination.

Ollie Johnson said it is important to “commit to fighting for your people the best way you can and any way you can.”

The celebration concluded with Wheeler encouraging participants to take part in Karamu, which is a celebratory feast. Recipes and a list of Black owned businesses was included with registration for the event, Wheeler said.

“We typically have a feast where we eat together in person and break bread,” Wheeler said. “We won’t be eating in person but we can still eat.”