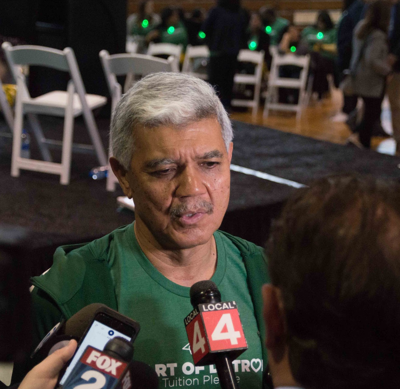 Members of Wayne State’s Board of Governors said they were not given notice of the Heart of Detroit Tuition Pledge until the morning of the announcement, according to a statement issued to the press.

Board members Sandra Hughes O’Brien, Michael Busuito and Dana Thompson said the pledge is “the latest example of Wilson’s lack of transparency and accountability to his employer, the Board of Governors,” according to their statement.

“Julie Miller, the board secretary, announced the existence of the Heart of Detroit Tuition Pledge to the entire Board of Governors the morning of the public announcement attended by Wilson, Chair Trent, Governor Whitmer, Mayor Duggan and a crowd of Detroit Public School students,” the statement said. “The announcement of the Tuition Pledge was a desperate move by a President on the ropes who has exhausted all options and is digging in but as Board members, we will continue to hold him accountable.”

The Heart of Detroit Tuition Pledge is the latest announcement from WSU, giving students who graduated from a high school in Detroit or live in the city free tuition to WSU. This was announced on Oct. 23.

The three members said this pledge has serious financial, political and reputational implications and further said Wilson is a danger to WSU.

As examples, they refer to the decisions made at a June 21 meeting, where only three members of the board were present, and WSU general counsel said Wilson counted as an ex-officio member of the board.

“These are just two examples of President Roy Wilson’s disrespect for the Board and repudiation of the will of the citizens of Michigan who democratically elected all eight members of the Board of Governors,” they said.

Board Chair Kim Trent said despite what O’Brien, Busuito and Thompson said, Wilson is not “on the ropes” and the university is doing well under his presidency.

“The university is thriving under his stellar leadership and his leadership is being recognized throughout the academic world, except in the minds of these three board members who can’t push past their own egos to acknowledge the progress the university continues to make,” Trent said.

The divide between the BOG began when the three members, who oppose Wilson, questioned extending his contract at a Dec. 7 meeting, according to The South End. The contract gave Wilson a five-year extension and a $603,343 annual base salary — about a $100,000 increase from his previous contract.

In March, the three members called for his resignation, but Wilson stated he doesn’t plan on leaving the university.

Trent said it was wrong to not let the members know of the tuition pledge before the morning of the announcement and said something like that cannot happen again.

“It was an unfortunate mistake that the entire board was not informed of the announcement in a timely manner,” Trent said. “However, as these board members know (or should), the program does not require board approval.”

Director of Communications Matt Lockwood said Trent was informed and the university worked with her in planning the event. They regret not letting the rest of the board know in a timely manner, Lockwood said.

“For most announcements, we alert the board prior to sharing the information with other stakeholders, including media, often the day of the announcement,” Lockwood said. “The event was originally going to be more modest, but during the planning, we felt it deserved more public attention.”

The three opposing members said they have a duty to serve the university, and that includes holding Wilson responsible for his actions.

“One of the main responsibilities of trustees of a university board is to demand accountability from their employees, the president,” they said. “Those trustees who fail to meet this responsibility, fail the University students, faculty, staff and citizens of Michigan. This is what happened at MSU, with disastrous consequences.

“President Wilson is not a leader who is able to execute the ideals and the will of the Wayne State University Board of Governors.  For these reasons, he must leave the University, now.”

Susana Hernandez is managing editor of The South End. She can be reached at susana.hernandez@wayne.edu.