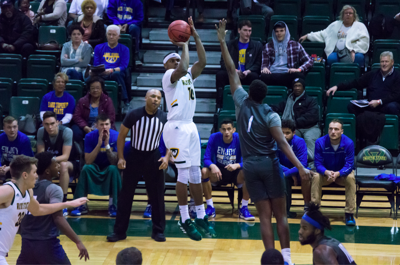 The first 10 minutes of the game were evenly played, as there were five lead changes with the Lakers holding a 22-20 lead.

WSU went on a 9-0 run, paced by baskets from senior guards Brailen Neely and Karim Murray, to take a 29-22 lead.

After the Lakers scored the next seven points to tie the game, both teams continued to trade baskets for the rest of the half, with a late basket by Murray giving WSU a 35-33 lead at halftime.

LSSU scored the first eight points of the second half to take a 41-35 lead. The Lakers maintained their advantage for most of the period, leading 66-55 with six minutes left in regulation.

Neely and Murray combined to score WSU’s next 11 points to tie the game at 66 with 2:46 remaining.

After the Lakers pulled ahead 72-70, a layup and converted free throw by Murray gave WSU a 73-72 lead with 21 seconds left in the period.

LSSU reclaimed the lead with a basket with seven seconds left in regulation to take a 74-73 lead.

WSU had a final opportunity to win the game, but turned the ball over without getting a shot off, sealing the win for the Lakers.

Head coach David Greer said he felt the team put itself in position to snap its losing streak.

“I thought our guys played hard, we got down by double-digits and fought our way back and took the lead, (but) we just got to finish the deal,” Greer said. “I thought our defense was efficient enough, it was more so our turnovers and lack of rebounds.”

Murray posted a season-high 27 points, while Neely added 18 points and eight assists. The loss dropped WSU’s record to 4-12 on the year, and 1-11 in conference play.

After the Lakers scored the first five points of the game, senior guard Alex Matus hit four straight three-pointers to give WSU a 12-5 advantage.

The triples by Matus ignited a 19-2 spurt by the Warriors, as they held a 22-9 lead late in the period and led 23-11 after the opening quarter.

Head coach Carrie Lohr said the early baskets by Matus made it an easy decision to run the offense through her early in the game.

“She just had a confidence about her when that first one went through, and then the second, and the third one, and I thought, ‘I’m just gonna let her go until she looks like she needs some water, other than that, she’s staying on the floor,” Lohr said.

Matus and junior forward Tori Perez combined to score 13 of WSU’s 20 points in the second period as WSU took a 43-32 lead into the intermission. Matus set a new career-high by scoring 21 points in the opening half.

The halftime break didn’t stop Matus’ rhythm in the third period as she scored eight points early in the stanza to increase WSU’s advantage to 51-39 halfway through the period.

WSU held the Lakers to one field goal in the final five minutes of the stanza to take a 60-41 lead into the final quarter.

WSU maintained control of the game in the final quarter, as their lead never dropped below 20 points, and on the team’s final possession of the game, Matus hit three free-throws to push her over the 30-point mark, finishing with a new career-high of 32 points.

Matus said she wasn’t aware of how many threes she made, or that she tied the school-record with nine triples, but was focused more on converting the shots.

“I think especially my sister (senior guard Lyndsey Matus) was keeping count for me, but honestly my teammates played a big part in that,” Matus said. “They were like ‘we’re trying to get it to you,’ and I really appreciate the unselfishness that they showed tonight.”

While she had a game similar to her performance versus LSSU in high school, Matus said it was special to do it considering how the team wanted to avenge its loss in the team’s first meeting last month.

“We were definitely focused on them this week every day in practice (and) we did have a chip on our shoulder, so to come out and do it tonight was special,” Matus said.

WSU improved its record to 12-8 overall, and 6-6 in conference play.

Both teams return to the Matthaei to face Ferris State University Feb. 1.

Irving Mejia-Hilario is a contributing writer for The South End. He can be reached at ismejia48@wayne.edu