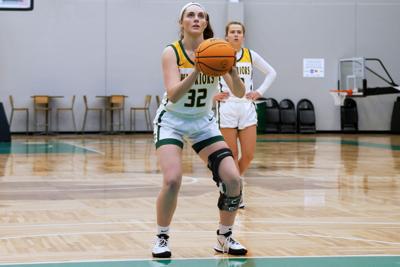 Wayne State women’s basketball crushed Davenport University 74-35 on Saturday at the WSU Fieldhouse, capping off the team’s regular season with a win on Senior Day.

The Warriors’ successful season led them to a 17-8 overall record and they went 13-7 in conference play.

The Warriors led the entire game against the Panthers Saturday, with their largest lead in the fourth quarter at 39 points.

WSU shot the ball well, going 41% from the field goal and 33% from the three-point line. The Warriors excelled the most on the boards, outrebounding DU in total rebounds 58-33.

Sam Cherney, senior forward and the GLIAC’s top rebounder, picked up 10 rebounds and 18 points. It was her 11th double-double this season.

Cherney broke the thousand rebound mark with a total of 1,008 rebounds for her career, a career moment in her final regular-season game.

Senior forward Grace George, who had eight rebounds and 16 points herself, said her favorite moment of the game was Cherney’s milestone.

“My highlight tonight was Sam Cherney with the thousand rebounds,” George said.

Beyond rebounding and scoring, the Warriors were lockdown on defense as well. They only allowed the Panthers to shoot 18.5% and an even worse 13.8% from three-point range.

“I just think that Kate Sherwood did another exceptional job,” Lohr said. “You know she’s coming off a Thursday night holding an all-league player to one for nine from the field. Then she comes in today and defends Toni Grace for what, 2-14? You know she was really our defensive specialist. She gets that assignment day in and day out.”

The Warriors’ senior-led performance was topped off with graduate student guard Alexis Miller, who scored 16 points and earned nine rebounds.

Lohr said all the seniors played exceptionally, and the win was a fitting end to their storied careers.

“I hope that it is going to give us momentum into our postseason,” Lohr said. “I think it was well deserved by our seniors who have really been remarkable for four years.”

Miller said the team is excited for the challenges that lay ahead.

“I think we are really hungry,” Miller said. “It’s about taking it one game at a time. We talked about it yesterday, how we are in phases. We completed phase one now we are going to phase two and three and seeing how that goes.”

Graduate student forward Tori Perez had her season cut short due to an injury but she said she’s enjoyed watching her fellow seniors’ progress.

“I’ve seen them all grow up and we’ve been together this whole time,” Perez said. “Just seeing their growth the whole time has been so amazing. And I’m so proud of each and every one of them.”

Lohr said she’s impressed by her seniors for their focus on the relationships they’ve built together.

“The fact that they have all said it’s how they have made each other feel and being a part of something,” Lohr said. “I think you know when you enter into this you kind of think oh what about being the leading scorer. Or being all-league. Or what about this or that. And you can really get distracted, and you know I just think that they’ve learned the most valuable lesson, it's really about each other.”

Lohr said she will look to capitalize on WSU’s momentum heading into the postseason.

“I just think that there is so much more left in this group,” Lohr said. “We have to minimize our mistakes and come with the rebounding mentality and the defensive mentality to just give ourselves a chance.”

The Warriors will face off against the University of Wisconsin-Parkside at the WSU Fieldhouse Wednesday.