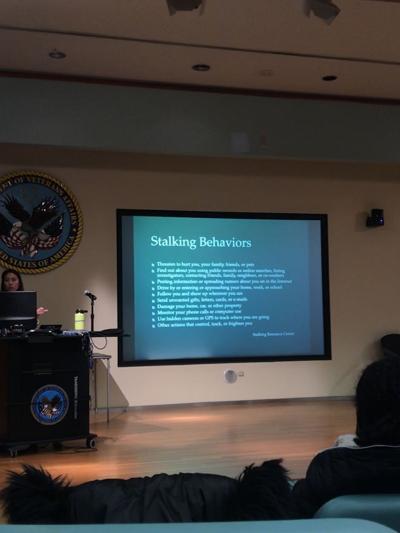 January marks National Stalking Awareness Month, and according to the Centers for Disease Control and Prevention, about 1 in 6 women and 1 in 17 men have experienced stalking in their lifetimes.

On Dec. 26, Netflix released the second season of its series “You,” a show about a male character who obsessively stalks a female character and takes part in violent crime. Since the season’s premiere, there have been 15,000 social media posts about the show since Dec. 26, according to Brandwatch.com — a social media monitoring and analytics platform.

Dr. Karen Oteyza, resident psychiatrist at the Wayne State School of Medicine, said the show may have some positive and negative outcomes.

“For some people, they may be more apt to watch their backs or maybe be cognizant of who they interact with,” Oteyza said.

Oteyza delivered a talk about stalking on Jan. 8 at the John D. Dingell Veteran Affairs Medical Center. The lecture was titled, “There’s Something About Stalking: A Lesson on Obsessive Following and Pursuit.”

Oteyza said she named the lecture after the 1998 film, “There’s Something About Mary,” which is another example of a movie portraying a male character stalking a love interest.

She said normalizing obsessive behaviors are harmful to individuals who may be victims unknowingly.

“Because (stalking) is being popularized, some people don’t think it’s that serious and it can minimize people’s cognizance of being aware of their surroundings,” she said.

He be killing people but still able to reply to texts. Don't settle for less, ladies and gents.🙃#YOU #YOUSEASON2 pic.twitter.com/BDFP21VCgt

Oteyza provided the legal definition of stalking as, “the willful, malicious and repeated following and harassing of another person.”

The lecture’s goal was to heighten awareness of stalking to mental health professionals. Oteyza specifically focused on psychiatrists and other professionals because they’re exposed to a higher amount of people that may exhibit stalking behavior as a mental illness or personality disorder, she said.

Oteyza was stalked by a male patient who wanted her to be his psychiatrist. The patient would show up to the hospital she worked at on a daily basis, ask about her and obsessively sent her emails.

She said that in her case, the patient didn’t exhibit malicious intent, but it was still unacceptable obsessive behavior that needed medical attention.

At the lecture, Dr. Carmen McIntyre discussed three different experiences she’s had with stalkers during her time as a psychiatrist.

McIntyre currently serves as the chief medical officer for the Michigan Department of Corrections and as the associate department chair of the psychiatry and behavioral neurosciences department at WSU’s medical school.

She works with rehabilitating those with mental illnesses and behavioral issues like stalking.

She elaborated on how incarceration doesn’t provide the necessary attention and healing needed to those patients.

McIntyre said one of the stalkers threatened to kill her, and stressed the importance of taking this obsessive behavior seriously and getting law enforcement or others involved as soon as possible.

“Especially if (the stalking) is kind of romantic, it can be flattering at first,” she said.

She said that even if the stalking behavior doesn’t perfectly fit the legal definition to be charged as such, it could be charged as harassment or other similar terms.

She recommends students to reach out to anyone if they ever feel uncomfortable or unsafe.

“Sometimes people will tell you to blow it off or it’s no big deal, or ‘how can they find you?’” McIntyre said. “But just keep pushing until you find someone who’ll take it seriously and is going to help you with the next steps,”

For concerns or support related to stalking, visit safehorizon.org.

Malak Silmi is the news editor of The South End. She can be reached at newseditortse@gmail.com