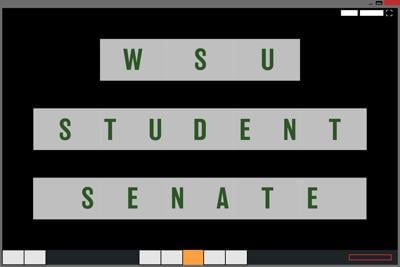 WSU’s Daycare Implementation Committee circulated a survey to assess student, staff and faculty needs regarding childcare. The student population at WSU is very diverse, and there are many students who take care of children on a regular basis.

According to the survey results presented by committee chair Loraleigh Keashly, 33.9% of WSU students, staff and faculty have individuals under the age of 18 living with them, either their children or siblings.

The survey not only covered demographics but also what students and employees living with children need after the COVID-19 pandemic is over. This was the main focus of the survey, Keashly said.

The areas childcare respondents reported needing the most help with post-pandemic were in-home, center-based and school care, Keashly said.

“The experience in the pandemic has shifted some of the types of childcare that people are willing to consider or looking for,” Keashly said.

The survey also examined the WSU community’s understanding of the childcare resources that are available. The majority of respondents said they were ineligible for the resources, but many were unaware, Keashly said.

The two childcare facilities on campus —the Merrill Palmer Skillman Institute for Child and Family Development and College of Education Early Childhood Center— and the plentiful resources, like lactation support and WSU Parenthood Chronicles Support Group, are more familiar to staff and faculty with children than students, according to the report.

Keashly and the committee are looking for ways to communicate to faculty, staff and students that WSU welcomes families, she said.

“We’ve thought about these things that are kind of embedded or could be embedded in the structure of the campus,” Keashly said. “Or think about this: you go into a restroom and you see a changing table. That tells us that we’re thinking about them. … we want to think more also about how we signal.”

In addition to improving campus child care, the committee may potentially be partnering with the Woodbridge Neighborhood Development Corporation to develop a child care center, Keashly said. Located in Detroit’s Woodbridge neighborhood in a building that was formerly a school, the new facility is expected to greatly impact WSU community members with children, she said.

No final details on this potential partnership have been disclosed.

For more information on the resources provided by WSU, visit the Child Care Resources website.

In addition to discussing childcare, Senate voted in favor of implementing a Queer Studies minor. The measure was passed during the previous academic year and Thursday’s was a follow-up vote, said Senate President Riya Chhabra.

“It is a core value of this University to promote diversity and inclusion, with the recognition that embracing the identity of a welcoming campus to all makes us a stronger community …” said the statement read by Chhabra. “... it is the core mission of Wayne State University Student Senate to support initiatives that promote student success and reduce barriers that students face at this University.”

Along with the resolution, Senate voted to approve a letter of support for getting the new minor program up and running.

Also discussed were future initiatives to be implemented on WSU’s campus.

Senate is teaming up with Facilities Planning and Management to launch a program providing free feminine hygiene products in three restrooms on campus, Chhabra said. State Hall, the Student Center and the Undergraduate Library will each have one bathroom stocked with the cost-free products.

The pilot program will collect data on usage to determine expansion.

Senate and FPM are also working together to provide water refill stations in select buildings across campus. The need for such devices has been heightened by the pandemic, Chhabra said.

“Our hope is to get at least one in every building that is frequently used by students because going back on campus, it’s just a safer alternative to the traditional drinking fountains, especially in this pandemic time, so we would like to provide students with that option,” she said.

Both of these initiatives are expected to be implemented by fall, Chhabra said.

Student Senate will have its next virtual meeting on March 25 at 6 p.m.