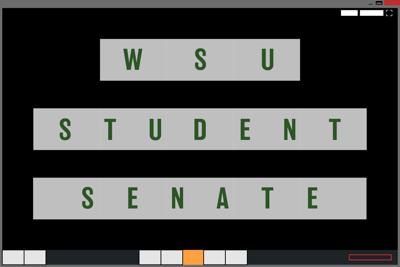 During a presentation from Associate Vice President of Student Auxiliary Services and Chief Housing Officer Timothy Michael on costs and campus life, viewers left dozens of comments in the Facebook live chat asking Senate to acknowledge Palestine. The Senate Facebook account responded to some remarks in the live chat through the opening two hours, stating that Palestine would be addressed later during the meeting.

About two hours in, Senate President Sailor Mayes opened the floor to the speakers list to discuss Palestine. College of Education Representative Lukis Bagdon began, arguing WSU should take a firmer stance on Palestine, they said.

“The new business I am presenting today is that the Student Senate has a duty to the people of whom in the WSU student body and abroad were affected by the crisis currently in Palestine. Us staying silent is taking the side of an oppressor and an occupier,” Bagdon said.

During a recent e-board meeting, Palestine was placed on Thursday’s agenda. However, Mayes said she and Senate Vice President Jasmine Coles removed it prior to the meeting. Several other Senators said they were not consulted in the removal of Palestine on the agenda.

Director of Government Affairs Harrison Cole said he was concerned by the removal of Palestine from the agenda before the meeting.

“I’m quite frankly disappointed at how this has gone down. At last week’s executive board meeting, there was lengthy discussion and we decided to put it on the agenda for today’s meeting, to talk about Palestine. When this was removed at the last minute, people raised concerns,” Cole said.

Mayes responded to the concerns, stating that herself, Dean of Students David Strauss and Coles preferred to address Palestine at another time.

“The reason we decided to take it off the preliminary and not put it on the final is because we thought this discussion would be better off in a meeting either tomorrow morning or on some other day when other people are available,” Mayes said. “We had a lot of people (in the group chat) who had a lot of emotions and personal statements and maybe some people didn’t feel comfortable bringing that out.”

Mayes said ability to send messages in the Senate WhatsApp group chat was restricted, following several messages in favor of making a statement on Palestine.

Cole said limiting access to the chat was inappropriate.

“Because people voiced their concerns, we were silenced by making the group chat only available to have people who are admins speak. Which, I believe, is currently only Sailor,” Cole said. “I just think this is totally unacceptable to silence all and any discourse. I think it’s profoundly undemocratic to go against what the entire executive board agreed on doing last week.”

Mayes said the group chat is meant to be used exclusively for updates, not conversations on issues.

“For some senators in the group chat to completely go against our rulings of saying that this group chat is for updates is honestly very rude and disheartening,” Mayes said.

She also said some senators behaved inappropriately in the group chat.

“As leaders, I think we deserve some respect, and that was not given today. When you guys come at us like that and we tell you guys ‘Hey, message us on the side. Our group chats are not for that.’ And you guys don’t listen to us, of course we’re going to deactivate the speech, because you guys are not listening to us,” Mayes said.

Coles said she agreed this is a global issue, but Senate should speak out solely on issues directly related to the WSU campus.

“There’s definitely a problem in Palestine. As a new Senate, we are allowed to create the rules that will regulate and guide us and set our own precedent,” Coles said. “I think it’s important that we set the precedent now that the only thing that will guide us are the current things that happen on and around the university.”

“This isn’t a partisan issue, this is a humanitarian crisis. As the student government at our institution, I think it is our job to educate and inform students about the genocide and ethnic cleansing and occupation of Palestinians. I think we should consider that this is affecting our community at home,” Khalique said.

Mayes said she wanted Senate to be cautious in making a statement due to potential ramifications WSU could face if one were issued. Coles, Mayes and Strauss said Senate’s prior statements on issues like the ongoing Indian farmers’ protests hurt Senate.

Strauss later interjected and said, though it was not guaranteed, a statement could possibly damage WSU and may not be within Senate’s reach.

“We’re in a budget situation right now in Lansing. We want folks to be funded and this may or may not be something that lawmakers support. You also have to ask yourself, ‘Is this the role of the Student Senate?’ Strauss said.

Treasurer Fatima Hammoud said Senate has a responsibility to stand with Palestinians students at WSU.

“Anybody who is facing such extreme injustice and oppression should have the support of all of us. Especially from a school where we have a large Arab American, specifically Palestinian body, we should be standing with them,” Hammoud said.

Student organizations at various Michigan universities have made statements in solidarity with Palestinians, including the University of Michigan Central Student Government and Michigan State University College Democrats.

Strauss said he believed some members of Senate need to become more educated about the crisis in Palestine.

He said he felt like he had been unreasonably criticized for his religion.

“I certainly feel the emotion. Some people, I think, have unfairly judged me based on my religious practice. I’m not accusing anyone of that, but it’s just a sentiment I have felt. I would say that’s really unfortunate, because I thought you knew me better,” Strauss said.

Secretary Nasrin Nesha said Senate has a responsibility to stand up for Palestinians as it did for Black Americans following the death of George Floyd last summer.

Mayes said she heard Senators’ concerns throughout the meeting, noting she is in a new position.

“The reason I’m beginning to agree with you guys is because of your statements,” Mayes said. “This is my first week as president, and I did not expect my first week to go like this. I think everyone needs to understand where I’m coming from. It’s a lot of pressure and a lot of intimidation.”

After more deliberation, Mayes called a vote to create a committee that would formulate a statement on Palestine. The motion unanimously passed, meaning seven senate members will discuss a statement and its potential contents, such as links for donation and educational resources on Palestine.

Senate may release a statement on Palestine in the next two weeks. The next Student Senate meeting will be June 3 at 6 p.m.

Irving Mejia-Hilario is the managing editor for The South End. He can be reached at ismejia48@wayne.edu.