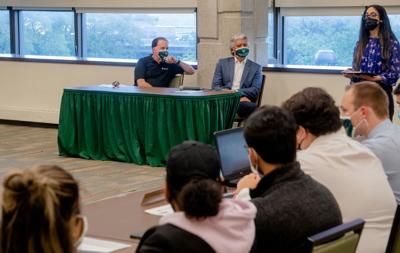 “There’s been some indication that training strengthens individuals’ comprehension and knowledge of mental health, conditioning a strong belief in assisting people with mental health issues, as well as improving the acceptance and positive attitudes about certain mental health illnesses and also trying to minimize the stigma that it entails,” Varmon said.

This training will serve as a significant resource, Hammoud said.

Senators also presented updates on project groups and their initiatives.

Director of Government Affairs Harrison Cole said work on an urban farm behind St. Andrew’s Hall is expected to begin in spring 2022.

“That is going to seek to establish an urban garden on campus for research and other purposes, as well as maybe seeing a student organization able to rent a plot of land,” Cole said.

Parliamentarian Yousra Zouani presented an initiative to establish a Center for Assault Awareness, Resources and Prevention to address sexual assault on campus.

“It would be a center for Wayne State students that focuses on providing health and wellness resources, it will raise awareness for the community, and it will enact preventative resources and measures to decrease the prevalence of sexual assault,” she said.

Senators spoke with officials at Michigan State University and the University of Michigan, who have similar centers, as well as Haven, an advocacy group, Zouani said.

The center would offer services such as a 24/7 crisis line, designated nurses, and required consent training, she said.

Senate has received support from the Title IX Office, faculty and student organizations on this initiative.

“I wanted to just have an outlet for MENA students to have more representation and be able to push their success and their purpose,” Ghoujeghi said.

She said the lack of a MENA option in demographic surveys undercounts MENA students at WSU.

Wilson said WSU seeks to include a MENA option for internal data, though it is not possible for federal data. The U.S. Census does not have a MENA category, instead characterizing individuals of MENA descent as white, The South End reported.

Ghoujeghi will meet with five MENA student organizations each semester, she said.

Senator at Large Amina Khalique provided an update on menstrual product dispensers on campus, which passed in April.

Of three dispensers, one is currently operating in State Hall, Khalique said. Two others are expected to be installed in the Student Center and Undergraduate Library this week, following a temporary delay. The dispensers were returned and reordered due to unspecified issues.

A survey will be sent to students to get feedback on the dispensers, Khalique said.

Senators are also seeking to expand the availability of contraception on campus through vending machines, Director of Community Affairs Mannat Bedi said. Currently, students can purchase a $5 condom club card to redeem contraception at the Campus Health Center.

“We found that some students may feel a little uncomfortable going and getting this from a specific person, so the idea was to have condoms and other contraception available in the vending machines on campus,” Bedi said.

Wilson said WSU is currently implementing Social Justice Action Committee recommendations, though some significant items are on hold as the university awaits a budget update. An update is expected on Tuesday.

Senator at Large Abe Ahmad provided a report from the Academic Restart Committee.

Out of 26,000 submitted vaccination documents, 1,241 exemptions were approved, Ahmad said.

“So I think it’s safe to say that we have a very healthy campus this semester,” he said.

Strauss addressed a recent incident on campus, which he said occurred without WSU’s permission and violated the university’s values. He encouraged students to avoid engaging with disruptive groups and to call WSU Police if necessary.

There have been several recent incidents of students refusing to follow WSU’s indoor mask mandate and violations are being enforced, Strauss said.

Wilson and Kornbluh said they will seek to support Senate in its initiatives.

Student Senate will hold its next meeting in Student Center Hilberry AB on Oct. 7.