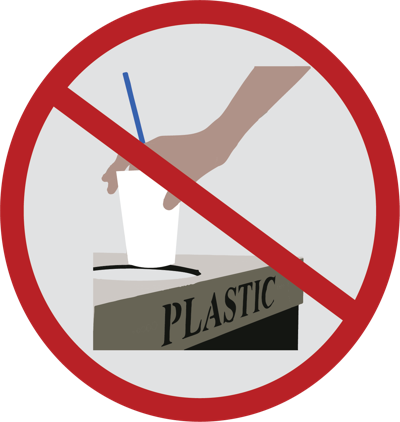 Single-use plastic is an incredible contributor to the global climate crisis, and Wayne State can lead the battle against it in Michigan, but what does that mean and how can we make an impact? Experts agree that the best way to reduce plastic pollution is to reduce the amount that is produced.

Everyone has seen the spattering of plastic cups, straws, bags, and more all around our campus and Detroit. While this is the most visible reminder to most people, it is not representative of the greater problems surrounding single-use plastic.

Sarah Surber, an environmental justice expert and environmental health professor, said she believes it is important for people to understand how wasteful the entire plastic production process is.

Pollution is generated at every step of the way, despite the fact that many of us think about it only after we’ve used and discarded the plastic item. For example, the process to create a Coke Zero bottle requires incredible energy to get to the consumer.

“The distance (the bottle traveled) in terms of trucking, the generation of the plastic, all of the goods required to make the plastic, and where it ends up at the very end,” Dr. Surber said.

Plastic is made from oil, a limited and ecologically harmful natural resource. It takes immense amounts of energy to extract oil to make it into plastic, package goods, and transport those goods all over the world, to finally end up in the hands of the consumer.

While it may seem like an impossible feat to change the way that our society produces goods, Dr. Surber said this trend is new and simply needs to be reversed.

This is a new phenomenon if you think about our grandparents. They didn't have the kind of waste that we have talked about,” Surber said. “My classrooms, the amount of waste that we generate just individually had never been conceived of prior to maybe like the 80s and up, we started generating more and more waste.”

Many people assume that recycling is the answer to the plastic waste problem. However, Director of Community Engagement Madi Kraus from Green Living Science, a Detroit non-profit that teaches kids to recycle, said it’s more complicated.

“Single use plastic and soft plastics just aren’t recyclable,” Kraus said. “They cause a lot of issues in our waste stream.”

Soft plastics include food wrappers, shrink wrap, tape and other single-layer flexible plastic items, all of which cannot be recycled. In contrast, according to the EPA, hard plastics are often recyclable, but only about 8.6% of plastic is recycled in the U.S.

Lilly Sedaghat, multimedia environmental journalist and speaker focusing on the intersection among science, systems and people, said in a National Geographic article that plastics are not as sustainable as other materials.

“The same piece of plastic can only be recycled about two-three times before its quality decreases to the point where it can no longer be used,”  Sedaghat said.

Materials like aluminum and glass are infinitely recyclable, making them more sustainable in the long-term, Sedaghat said.

What happens to plastic that isn’t recycled? Primarily, it ends up in landfills, according to Kevin Loria, a correspondent for Consumer Reports covering science and health.

Surber said she’s concerned about the state of the United State’s landfills.

“We are lucky in this country because we have a lot of space, but that’s kind of cut two ways for us because we don’t often think about how much landfill space there is. We can’t keep generating more and more landfill space over time. There is only so much land that we as a society should be willing to give up and abandon just to have landfills,” Surber said.

Surber also said that dirty and smelly landfills do not impact all Americans equally.

Disadvantaged communities and poor neighborhoods are far more likely to host garbage management centers, and thus are most affected by pollution and unclean air, she said.

There’s a fair amount of plastic that doesn’t end up in landfills. It lines streets and sidewalks, detracting from the beauty of cities and nature all over the United States.

But this litter doesn’t stay on the side of the highway forever, said Yongli Wager, WSU professor of environmental civil engineering.

“(Plastics) are chemically persistent, but if they go to the environment and are exposed to mechanical force and UV exposure, physically, those plastics, they could become very fragile,” Wager said. “They become very fragile, they will break down into smaller particles, as we call microplastics.”

These small pieces of plastic end up in soil and water streams and are consumed by animals and people.

Zhijiang Lu, a WSU environmental science professor studying the harmful effects of plastic additives like bisphenol, collected data on the concentration of microplastics in Detroit parks. He found an average of 1,756 pieces of microplastics per 100 grams (or kg-1) of soil.

That frightening number is indicative of how great this problem is. If we do not curb society’s overconsumption of plastic goods, it will have serious negative effects on our planet’s health.

Microplastics don’t stay on land, they pollute waterways too. Wager found that microplastics have negative health effects on fish who consume them. She said she fears the same health complications for humans.

“Like many other environmental pollutants, once they are in the environment and end up in our water and food supply, there could be some adverse impact on human health,” Wager said, however, that there isn’t scientific evidence at this time to confirm this theory.

In a recent study, researchers in the Netherlands found microplastics in the blood of several participants. These results are understandably concerning to many people across the globe since we do not know the health effects attributed to this new finding.

“(The head researcher) has been cutting down on his own exposure to plastics by limiting single-use plastics,” Smithsonian Magazine Daily Correspondent Margaret Osborne reported.

Michigan has laws like Senate bill 0853 which prevent municipalities from placing bans on plastic. Though these laws prevent city-wide actions, they don’t prevent institution-wide changes.

This makes college campuses the best and only place to take action.

It’s vital that we work toward a future that views single-use plastic as a last resort, not the best option.

The best approach to address this problem is for WSU to phase out unnecessary single-use plastics, replacing them with reusables and compostables. This would include discontinuing the use of plastic silverware, K-cups, plastic wrapped napkins, shrink-wrapped items, etc.

WSU needs to commit to investing in alternatives for all single-use plastic items in the long-term and as the alternatives develop. However, this is not enough. These actions need to be coupled with education on the harms of plastic and accountability and transparency for WSU’s actions.

PIRGIM is pushing for WSU to sign a pledge that would commit to replacing single-use plastics with reusable and compostable alternatives. This group is a local chapter of a national network that has been successful at phasing out single-use plastics on several college campuses across the country.

Lu said he believes universities like WSU are in a unique position because its staff and students are passionate about academics.

“Places like WSU, where both students and faculty members value the approach to science, are a good place to start,” Lu said.

WSU has an opportunity to be a leader in environmental action. It would be the first university in Michigan to make this commitment, solidifying its position at the front of the pack and joining the ranks of the 17 other schools that have made the commitment.

This plan would allow our Warrior population to come together, working toward a common goal of achieving the greenest campus in Michigan.

Sydney Greenway is the President of PIRGIM (Public Interest Research Group in Michigan). She can be reached at hh9050@wayne.edu.

Cover photo provided by Hannah Sexton, graphic designer for The South End. She can be reached at go0353@wayne.edu.