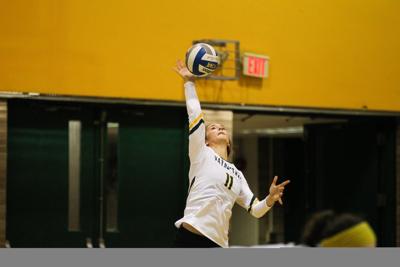 WSU entered the match looking to recover from a five-set defeat to Wisconsin Parkside on Sept. 20 at the Matthaei, where the Rangers came back from a 0-2 deficit to win the final three sets to post the match victory.

After the visitors started the opening set by taking an early 5-2 lead, WSU used two service errors and a kill by senior Madelyn Krenz to even the set. Both teams alternated points until WSU used a 6-2 run to take a 14-10 advantage halfway through the stanza. The Warriors would expand their lead throughout the period, taking a 23-13 lead. WSU ended the period with a kill by redshirt sophomore Taylor Wagner, which gave WSU a 25-15 opening set victory.

The second set followed the same pattern as Purdue Northwest held leads of 11-7 and 12-8 and held a 14-10 advantage halfway through the second stanza. WSU would use a 9-3 run to pull ahead 19-17. Both teams traded points until a PNW attack error extended the Warriors lead to 20-18. WSU finished by scoring five of the final seven points of the period, spurred by two kills by redshirt sophomore Lauren VanderWal and two combined aces that gave WSU the 25-20 set win and a 2-0 match advantage.

WSU opened the third set with six combined kills by Krenz and VanderWal, in addition to multiple service errors by the Pride, to jump out to an 11-3 lead. WSU expanded its advantage to 16-5 before the visitors made one final push to avoid the match sweep by cutting WSU’s lead to 17-11. WSU would withstand PNW’s final attempts to take a set, maintaining its advantage throughout the stanza to seal the match victory.

WSU’s offensive attack was paced by VanderWal, who had 17 kills, with sophomore Kamryn Duffield adding 38 assists and freshman Maddy Benoit leading the defense with 10 digs.

WSU improved its record to 6-4 (1-1 GLIAC) on the season with the win. WSU will play its next three matches on the road before returning home to face Saginaw Valley State on Oct.4.

Matt Williams is the sports editor of TSE. He can be reached at mattmwilliams86@gmail.com.