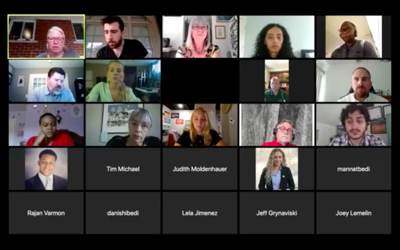 A new pilot program aimed to make course materials more affordable was discussed at the Student Senate meeting on Thursday.

For 17 WSU courses that require materials, the First Day Inclusive Access program will charge students for the materials at a price that is equal to or lower than the publisher’s, according to the Student Auxiliary Services website.

“A lot of our students have lost their part-time jobs, they're dealing with wage cuts and the price of textbooks and affordability initiatives have already been in discussion, and so it really did kind of breathe new life into what First Day is and how it could really benefit and impact our students immediately,” she said.

Several characteristics were determined in order to decide which courses would be included in the pilot program, Student Success Librarian Veronica Bielat said. Classes include large multi-section courses and those with a pattern of high drop, fail or withdrawal rates.

Students will receive materials on or before the first day of class and are able to opt-out of the program by Sept. 15 to receive a refund, but will then be responsible for purchasing their own materials, according to WSU’s website.

"There is a correlation shown between access to materials from the beginning of class to students having access to the textbooks and their ability to successfully complete the course,” Bielat said.

While not all classes with required materials are included, WSU is hopeful that the First Day Inclusive Access program will allow course materials to be more accessible to students.

A large number of resident advisors decided to resign from their positions due to COVID-19 related reasons, Miachael said. Fourteen staff members were laid off and were placed on an alternate list to be rehired if a position opens.

After Michigan State University, University of North Carolina and Notre Dame moved their classes online, WSU President M. Roy Wilson met with a few faculty members to review the fall plan and determine if any modification were needed, Michael said.

“We came out of that meeting feeling like we could stay the course, that we’ve done our thorough plan and that we think that we’re ready to move forward with the plan that we have,” Michael said. “And so we are going forward and move into housing starts on Monday.”

Senate also voted in favor of a resolution that would ask WSU to recognize Juneteenth and Indigenous Peoples Day as university holidays.

This resolution was led by Senators Kamali Clora, Isabella Warmbrunn and Jasmine Coles.

The resolution also asks WSU to “curate programming for these holidays to be observed by all members of the WSU community,” according to the resolution read by Clora.

Senator Lela Jimenez said she believes this resolution will have a positive impact at WSU.

“This is a super important and huge step towards social justice on our campus. It shows the students that we’re making an effort towards diversity, equity and inclusion,” Jimennez said.

Senate will be releasing the resolution to the public in the near future. Their next meeting is on Sept. 3 at 6 p.m.