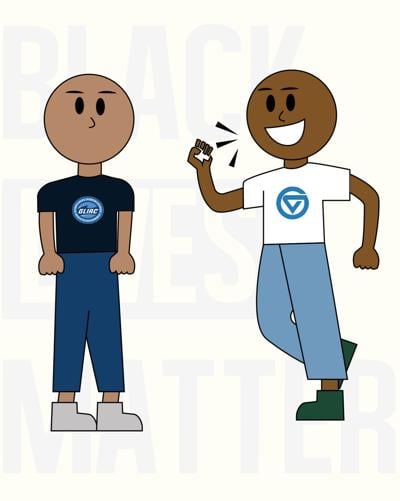 Since May 25, the day George Floyd was slain by police officers in Minneapolis, cities across the country have been flooded with protests as far as the eye can see. Even here in Detroit, over the past four months, protests have taken place to fight against the unjust killings of Black men and women across the country.

Most recently, the Aug. 23 shooting of Jacob Blake, an unarmed Black man, by police in Kenosha, WI sparked further outcry for justice, not only for Blake, but for the many other victims of police brutality.

In the sporting world, professional athletes across multiple leagues striked on Aug. 26 leading to the cancelation of games and practices across the NBA, WNBA, NFL, MLB and MLS. Not since the Vietnam protests of the late 1960s have we as the public seen so many athletes come out in brazen support of a social movement.

It is also worth mentioning that in the face of comments and actions being made by a number of professional athletes, steps are being made in many leagues to go beyond a dialogue. On Aug. 28, the NBA announced that they would be using arenas nationwide as polling locations for the upcoming November elections.

The Black Lives Matter movement has gained newfound support in just the past few months in unprecedented waves.

In 2016, when the Pew Research Center looked into public opinion on BLM, their study found that only 43% of Americans supported the movement. In their most recent study conducted on June 12, 67% of Americans were found to express support for the movement.

Among all groups surveyed, whether or not they support the movement, many appear to have had a conversation. Their findings show 69% of people claimed to talk with family and friends about it and 37% have also posted or shared content on social media.

This is to illustrate that there cannot be any sticking your head in the sand with this issue. There is no bravery in being apolitical at a time like this.

This leads me to the topic at hand: the NCAA and, more specifically, the Great Lakes Intercollegiate Athletic Conference.

In 2017, following Colin Kaepernick’s kneel during the national anthem to bring awareness to issues of racial inequality and police brutality, the NCAA issued a memo to cities hosting any active championships at the time. The memo advised them on how to handle potential protests that might take place.

"Student-athletes have the right to free speech. Kneeling during the national anthem or not coming out of the locker room for the anthem is not against the rules of the game. No action is required, and no extra attention needs to be drawn to it," the NCAA stated in the memo.

Here we are, three years later and in the middle of continued racial division in this country, the NCAA has turned back to the memo as a reference for how they will handle protests going forward.

No action being required is overtly apparent. No student-athlete who protests is breaking any laws or doing anything to interrupt the sport itself.

Wayne State law professor Robert Sedler said universities could not restrict athletes’ right to speak and express themselves as an individual.

"They [the players] are still individuals. The university has access to their locker rooms and dorms, but they can't prohibit somebody's First Amendment right,” Sedler said.

For example, the University of Alabama, notorious for their history of discriminatory practices, released a video starring members of the football team and head coach Nick Saban, with the central theme that until Black lives matter, all lives cannot matter.

Granted, genuine action still needs to occur across universities like UA, but sitting down and opening a dialogue is the beginning of enacting change across locker rooms and university grounds.

Here in the GLIAC, Grand Valley State University has done a plethora of things to ensure that their Black student-athlete voices are heard. Football head coach Matt Mitchell spoke out in an article published by GVSU's student newspaper, The Lanthorn, expressing his support for the movement. Along with that, he highlighted what the team is doing to ensure that a conversation is happening.

However, the buck appears to stop right there within the GLIAC. Despite the NCAA's support, every school, including WSU, has not given its student-athletes or coaches a space to discuss BLM or the protests openly.

On July 14, the Detroit Free Press ran an article asking schools what would happen if student-athletes decided to protest during the anthem.

Northwood University, GVSU and Saginaw Valley State University said this would not be a problem. The schools were adamant in their support of their students' rights to freedom of expression.

WSU Director of Athletics Rob Fournier was quoted in the Free Press saying, “Wayne State student-athletes when they put on the jersey recognize they are representing a university and not themselves. In competition we work and strive for success as a team."

President M. Roy Wilson rebuked the claims of Fournier in a June 17 letter, saying students would be within their rights to protest.

Despite many universities' public comments, GVSU remains alone in the GLIAC as outright promoting their student-athletes' voices on social issues.

Keri Becker, director of athletics at GVSU, said that raising awareness on racial justice is what their Support, Elevate and Activate initiative sets out to do. The initiative also educates people on white privilege.

Becker said she wishes to have as many student-athletes as possible in the SEA initiative.

Becker said she also has an interest in encouraging voting among the student body.

"In our quest to elevate the voices of our Black student-athletes, an important initiative is to vote," she said. "We cannot assume everyone has had the opportunity to register and vote, so we can do better by ensuring all of their voices are heard on election day."

Becker said she was not worried about the possible response to their stance.

"I am not worried about any backlash because I believe we are simply a part of a larger voice for change in society that is coming from people of all races,” she said. “Silence is no longer an option in these daunting times, so it is imperative people know we stand beside our Black student-athletes."

So what gives? Where are all the other universities within this conference? Where did all this outpouring of support go for their student-athletes? It's great for all of these institutions to say that they support student-athletes. The problem arises when it comes to taking action, as many athletic departments have done next to nothing.

Mind you, this is not an issue of student-athletes not wanting to speak out. Study after study, such as Martha Kwon's dissertation "Student-Athletes, Autonomy, and Self-Authorship Amidst the Organizational Culture of Collegiate Athletics," clearly outline that there is no distinction between a student-athlete and an average student with regards to social justice issues.

Even within GLIAC as an organization, there are spaces where the conference can make these voices heard. For example, the GLIAC has an official podcast. Why not invite student-athletes and coaches to discuss what they think can be done going forward?

For other universities, maybe athletic departments should look to what GVSU has done as an example. If universities are to be real allies then they must ensure that student-athletes have access to these opportunities.

Of course, this is not an easy fight, but now is not the time for every university to release a statement in support of their players and call it a day. Now is the time to amplify these voices and to finally hear the thoughts of our peers.

Celebrating Juneteenth on Twitter isn't enough. A tweet saying you "stand against social and racial discrimination" in 2020 doesn't mean anything. We need to hear from the voices on the inside. The GLIAC must enforce new policies that will help maintain engagement between student-athletes and institutions on social justice issues.

This is not an archaic battle within the GLIAC to see who will be the ultimate winner in the arena of social justice. There is no shiny prize that they can hang up in their trophy room at the end of this long and dark road. Perhaps that's what worries them the most. After all, something like this isn't pitchable to parents or boosters.

That said, it's depressing and discomforting that universities have committed to an endless fight amongst each other over trophies that will one day be reduced to nothing but a shadow of the past. Yet when it comes to a dialogue that will extend past any of our lifetimes, stepping aside with a mere whimper of support is somehow the path most GLIAC schools have taken.

This is it. These are our leaders.