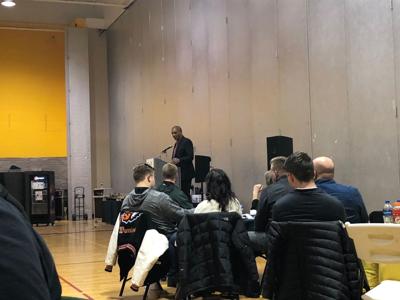 “We brought in so much talent (and) every position is upgraded because of these guys,” Winters said.

During the event, head coach Paul Winters and his coaching staff showed highlights of each player and discussed their skills.

While most of the new players coming to campus in the fall will be experiencing life at Wayne State for the first time, there was a hint of familiarity with four of the new recruits.

Winters said he sees an opportunity for members of this year’s class to earn playing time in the fall.

“There is open competition at some positions,” he said. “Those positions include corners, safeties and special teams.”

Winters said he is looking for the recruiting class to have on the team’s performance with their work ethic, talent and competitiveness.

“The work ethic that these guys show is going to push everybody in front of them,” Winters said.

The players currently on the roster are participating in the team’s winter conditioning program. A date for this year’s spring football game will be announced next month.