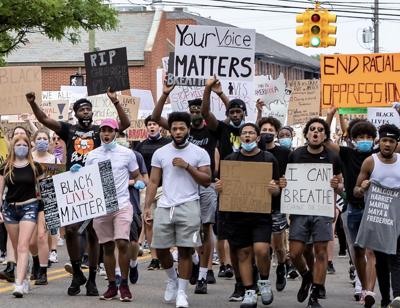 As the Black Lives Matter movement swept across the United States, protesting against police brutality and racial injustice, Wayne State student-athletes and coaches found ways to support the movement.

For Drake Reid, a WSU football player and second-year finance student, the BLM movement is a chance to protest for racial justice within the court and outside of it, he said.

“The police cannot be the police, the judge, the jury and execution,” Reid said.

People spring to police officers’ defense so fast in situations of brutality, trying to find a justification, Reid said. He is frustrated with false narratives being shared about George Floyd and other Black victims.

The justification of killings by police concerned Reid because of what it implies, he said.

“With that process, you’re basically saying that any crime is punishable by death,” Reid said.

Yasmine Affes, WSU track and field runner and third-year sports and exercise science student, urges those who doubt the legitimacy of the movement to look at statistics. Black men and women have a higher risk of being killed by police than white men and women, according to a Northwestern University study.

“As a Black man, growing up, I definitely had the talks with my father about how to act in certain situations,” Reid said.

Affes and Reid support the BLM movement in many ways: attending protests, signing petitions, donating to organizations and sharing on social media.

Reid also encourages people to vote in the Nov. 3 election.

Protests for racial equality started long before the BLM movement and there still is much progress to be made, Paul Winters said, WSU head football coach.

“I think we need to improve everything. I think that we’re gonna have to continue to push for racial equality for a very long time,” he said.

Winters said he is not an activist, but wants people to educate themselves and care about each other.

Winters installed a buddy system at the start of football camp, he said, pairing up teammates of different races and ethnicities, classes and religions. Buddies connected through different activities and shared meals. At the end of camp, they each shared what they learned about each other.

“You take away the mystery of Black/white, or, you know, Muslim/Christian,” Winters said.

Affes and Reid said people can educate themselves about Black History through books, movies, studies and other forms.

“Educate yourself on the past of Americans. By learning that, you can understand that there’s still progress to be made,” Reid said.

At a BLM protest on WSU's campus, Affes said she was disappointed with the turnout, being the only student-athlete present.

“I would like to see more people supporting minorities, especially the athletics department,” Affes said.

Protests are necessary to achieve racial justice in the U.S., Reid said.

“America never got any type of change by just sitting around,” he said.