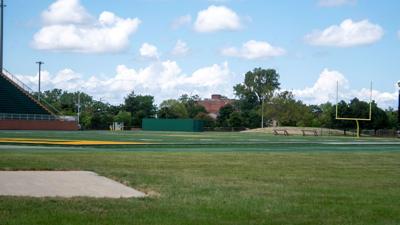 After competition across the GLIAC was disrupted by the COVID-19 pandemic in 2020, Wayne State Athletics is optimistic teams will be able to have complete 2021-2022 seasons.

While it’s too early to make a determination on the full scope of fan attendance, Weiss said, the GLIAC Council of Presidents and Chancellors recently voted to allow fans into games on a limited basis. Student-athletes are given a select number of tickets, ranging from three to four per student, according to WSU Athletics. Fans in attendance are required to stay 20 feet away from the court or field.

“I mean, we haven't played a game against another team since Grand Valley in November of 2019. So, getting on the field and just getting that competitive edge back and getting to compete with your brothers on the field, seeing— hopefully— fans in the stands,” he said. “That kind of depends on policies and what the university decides but just the game day atmosphere is something you can always look forward to.”

Fans experienced WSU sporting events online during the pandemic, as they were not allowed in venues. Streaming of events began on a pay-per-view basis in 2007, Weiss said.

“Since no fans were allowed for any winter sports, we chose to make it a free service for the 2020-21 school year for basketball, swimming and volleyball, and continued with the spring sports of baseball and softball,” Weiss said. “We will definitely be streaming home athletic contests next school year, the only final decision that needs to be made is if we will return to a pay-per-view basis or keep it free.”

“We're meeting like the same amount of times, we're just kind of treating it a little differently, I guess,” he said. “The nice thing about running is that even if there is shutdowns, you know, we can still run, as long as we're healthy and not putting anyone else at risk.”

An unexpected opportunity arose for the team this season, Weiss said. The men’s cross-country team was invited to run at the 2021 GLIAC Indoor Track & Field Championships.

“It was a whole different atmosphere that like none of us really, you know, had ever gotten to experience and it was cool to just to just be there,” Thayer said.

While the invitation to Indoor Track & Field Championships may be a one-time deal, Thayer said the team’s success shows the promise of a potential WSU men’s track team.

“Part of the appeal of doing well at a meet like that is showing that we could have a men’s track team and do really well,” Thayer said.

Thayer is also looking forward to seeing their teams hard work and training payoff in competition, he said.

“My first year here was all before COVID happened. And we were still like a really young team at that point. But it's kind of funny, because like our first season back, like, we're pretty much all upperclassmen. Now, it's kind of an old team now,” he said. “So it's gonna be kind of fun to see, you know, all those like two years of training, like what how that translates to, in our race day.”