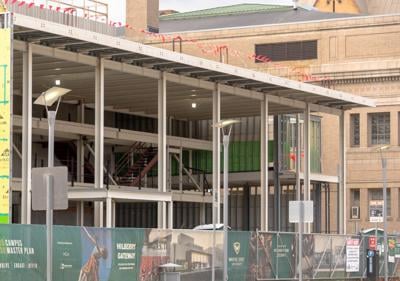 Wayne State has continued construction on the Hilberry Gateway project throughout this academic year.

The project includes the Hilberry Gateway theater and the Gretchen Valade Jazz Center, which will serve as the new performance space for students in the Maggie Allesee Department of Theatre and Dance and the Department of Music.

Director of Development John Wolf said the project has been in construction since 2019 and has taken longer than expected due to the addition of technology.

“It's (Hillberry Gateway) all electronic as well as automated lighting that you can move and point,” he said. “So we've got that kind of technology going into the building so that the students can actually be trained on 21st century equipment.”

Construction has been impacted by the COVID-19 pandemic but will continue, Wolf said.

“I think they'll be so thrilled to be in a space that is comfortable. The lobby is more spacious, the bathrooms are far more plentiful and in better shape,” he said. “So I think the experience will be better, which will help them, but the theater remains a lovely, intimate space.”

The Valade Jazz Center is a gift from jazz philanthropist Gretchen Valade, who it’s named after, said Director of Jazz Studies Christopher Collins.

“She (Valade) wanted to create a jazz center, a place that was about performance, about education, a place that was about outreach as a community — all that she insists out of the Jazz Fest Foundation,” Collins said. “She also creates venues, very unique venues that are specifically acoustically electronically, logistically designed for jazz.”

Collins said he hopes the Valade Jazz Center will help engage the Midtown community in access to affordable jazz performances.

“Once it's active, it's going to be this rolling display of jazz performance, student performance faculty, regional, national, and international stuff happening here,” Collins said. “And then community based experience — much of it for free to allow communities to come in and experience maybe a certain Latino artist they may not be aware of, or some of our women leaders in Jazz.”

Wolf said the Hilberry Gateway theater and Valade Jazz Center are a turning point for performing arts at WSU.

“It's a huge commitment to the performing arts that the university has made and that doesn't escape us and the university understood that our programs were actually being held back by the inferior spaces that we had,” Wolf said. “We are most grateful for the commitment of the university and the recognition of the potential for the programs of theater, dance, and music, no doubt.”