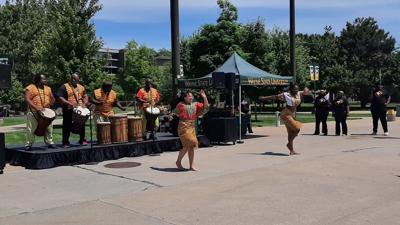 Juneteenth, which celebrates the emancipation of Black people in the U.S., is recognized across the country annually on June 19.

“The desire for freedom is universal,” Lindsey said. “We all crave freedom. Everybody wants to be free from tyranny, oppression, and enslavement.”

Lindsey’s opening speech recognized the success of Joseph Ferguson, the first African American student in Detroit to graduate from Detroit Medical College in 1869.

Lindsey said Ferguson’s legacy is why Juneteenth is important to celebrate.

“We’ve been in the business of educating minds since 1868,  which is only five years after the signing of the emancipation proclamation — three years after the first celebration of Juneteenth,” Lindsey said. “And so we ought to continue to embrace and celebrate this holiday.”

Juneteenth Planning Committee member Isabella Warmbrunn said she began lobbying for the holiday’s acknowledgment at an academic level in 2020.

Monday was the first time celebrations were held in-person due to the COVID-19 pandemic moving things virtual in 2021.

“It’s a big deal. Being someone who is biracial—Black and white. It’s part of my identity and my culture,” Warmbrunn said. “I worked for Wayne, I went to Wayne and a lot of my friends go to school here still. So it’s really important I think in the Black community to have that recognition at your school.”

BSU President Michael Joseph and other members raised a Juneteenth flag in honor of the holiday while music student assistant Ryan Bowie performed renditions of “Lift Every Voice and Sing” and “America The Beautiful.”

“This is my first Juneteenth event I have ever been to. I felt so much joy, connectedness, and loving energy,” she said. “Dancing in front of everyone was way out of my comfort zone but the beat of the drums made me feel so free in that space.”

The remainder of the opening ceremony was infused with calls for students to register to vote and music from DJ Twist.

Other events in the Juneteenth Celebration this week included discussion forum with speaker Dr. Errol Henderson and BSU Wednesday from 2 p.m. to 4 p.m.

A discussion panel will be held Thursday by the Organization of Black Alumni from 5:30 p.m. to 7:30 p.m. in the David Adamany Undergraduate Library.

Closing ceremonies will take place Friday from 2 p.m. to 5 p.m. in Gullen Mall in the form of a freedom march beginning at the Damon J. Keith Center for Civil Rights. The Juneteenth flag will be lowered during closing ceremonies and African dancer Karen Prall will perform, according to the Wayne state Juneteenth Instagram.

Warmbrunn said all Juneteenth events this week are designed for attendees to reflect, educate and celebrate to promote discussions.