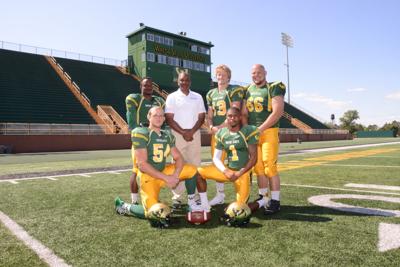 Wayne State football will look to post one of its biggest wins in recent memory as it faces 10th ranked Slippery Rock University in the season opener at Tom Adams Field on Sept.5.

WSU leads the all-time series versus SRU 2-1, with the opening matchup being the first meeting between the two teams since 1986.

Redshirt senior offensive lineman Charlie Younger said the focus of the team heading into the game is to execute their game plan.

“Obviously we’re trying to start something this season and I think a lot of the guys have bought into that,” Younger said. “(Slippery Rock is) a good team, obviously their record speaks for (itself) from last year, so we just gotta come out there and do our jobs and execute like our coaches tell us to do and we’ll see where the game takes us.”

Slippery Rock enters the season ranked 10th in the country after earning a berth in the Division II Playoffs last year, as SRU posted an 11-3 record last season. Slippery Rock returns its starting quarterback from last season along with the team’s top two pass catchers, who combined to score 15 touchdowns last season.

Sophomore linebacker Spencer Stephenson said adjusting to any new changes created by the opponent’s new offensive coordinator and transfer players added to the offense over the summer will be key for WSU’s defense.

“It’s gonna be a learning curve the first series of the game,” Stephenson said. “We’re gonna have to adjust very quickly to those guys and figure out their strengths and weaknesses, (but) as long as we trust our rules and what we’ve been taught, we’ll be completely fine.”

After missing substantial time last season due to injury, Younger, who was one of five players to be selected as team captain, said he was excited to be back on the field again during fall camp.

“There’s no worse form of torture than watching your buddies go to battle each week and not being able to really impact the team statistically speaking,” Younger said. “(But for) fall camp I really got to get physical and get the pads back on and start hitting. It feels great to be back out there with the guys again.”

Stephenson said playing a highly ranked team in the season opener is a big test for the team, but the team believes that they are up for the challenge.

“Playing the number 10 team in the country, obviously it’s a big test for a team that went 2-9 last year, but we have high hopes and we believe in ourselves that we are a very good team and we can prove that,” Stephenson said.

“It should be a very great atmosphere come Thursday and we’re all excited as can be and we can’t wait.”

Matt Williams is the sports editor of TSE. He can be reached at mattmwilliams86@gmail.com

Im excited too, can’t wait to see you winning game in very opening of season

All the best. Thank you

You're welcome, we all hope to be the best. Greetings from Lacak Resi Pos and Info Hotel

I am impressed. I don't think Ive met anyone who knows as much about this subject as you do. You are truly well informed and very intelligent. You wrote something that people could understand and made the subject intriguing for everyone. Really, great blog you have got here. https://dnbolt.com/tapeno

Efficiently written information. It will be profitable to anybody who utilizes it, counting me. Keep up the good work. For certain I will review out more posts day in and day out. Linkedin Actor

Pleasant post! This is a pleasant blog that I will conclusively return to more occasions this year. http://dreaminginberlin.com/beauty-urban-decay-blogparade-eyeshadow-primer-potions-im-vergleich/

Wow, What an Outstanding post. I found this too much informatics. It is what I was seeking for. I would like to recommend you that please keep sharing such type of info.If possible, Thanks. http://igualdades2007.blogspot.com/2007/07/

Hey, this day is too much good for me, since this time I am reading this enormous informative article here at my home. Thanks a lot for massive hard work. https://www.zdnet.com/article/park-right-there-under-the-third-solar-panel/

Stunning! How great and extremely awesome and the tracks are simply astounding. https://lauravoneden.de/2016/11

You make such huge numbers of incredible focuses here that I read your article a few times. Your perspectives are as per my own generally. This is extraordinary substance for your perusers. http://coralandmauve.at/blogger-adventkalender-2014/

I'm getting amped up for this sort of helpful data of your stuff later on. http://makeupglowonline.blogspot.com/2016/01/

Thank you so much as you have been willing to share information with us. We will forever admire all you have done here because you have made my work as easy as ABC. http://www.candypandas.pl/p/kontakt.html

Decent information picking up article. This post is actually the best on this significant point. http://www.wellgroundedlife.com/interview-and-giveaway-with-sherri-from-serene-journey/

Visit your blog routinely to get new things like this. Thankful to you. http://sjobrien87.blogspot.com/2012/12/happy-new-year.html

I am dazzled. I don't think Ive met any individual who knows as much about this subject as you do. You are really all around educated and exceptionally keen. http://srdjansandic.blogspot.com/

You have a genuine capacity for composing one of a kind substance. I like how you think and the manner in which you speak to your perspectives in this article. I concur with your perspective. Much obliged to you for sharing. https://socialphobiaworld.com/threads/read-this-before-you-end-your-life-counselling-sites-resources.61626/

You have a real talent for writing unique content. I like how you think and the way you express your views in this article. I am impressed by your writing style a lot. Thanks for making my experience more beautiful. local locksmith arizona

Thanks for an interesting blog. What else may I get that sort of info written in such a perfect approach? I have an undertaking that I am just now operating on, and I have been on the lookout for such info. lemon haze strain and delivery

I can’t believe focusing long enough to research; much less write this kind of article. You’ve outdone yourself with this material without a doubt. It is one of the greatest contents. locales baratos

This article is an appealing wealth of useful informative that is interesting and well-written. I commend your hard work on this and thank you for this information. I know it very well that if anyone visits your blog, then he/she will surely revisit it again. voyance audiotel