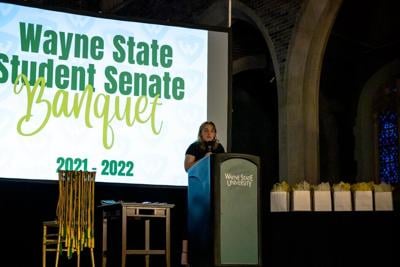 Editor's Note: This article has been updated with additional information to correct a factual error. Student Senate Vice President Jasmine Coles is a third-year medical student seeking re-election to Senate for its 2022-23 term. Senate Secretary Nasrin Nesha is one of the senators graduating this semester.

A previous version of this article stated that Coles was among the graduating seniors.

The banquet was held to celebrate Senate’s accomplishments, said Treasurer Fatima Hammoud, who organized the event.

“I just wanted everybody to know what they did over the years was appreciated by everybody and this is kind of like a little award for them,” Hammoud said.

“I’ve worked with a lot of students and I will tell you, that the last two years are really the most engaged and really the best students that I’ve ever worked with,” Wilson said.

Kornbluh said in his speech to the senators that he has seen the amount of work they have put into campus.

“What I’ve found in listening to you and learning from you this year is that all of you have a really wide picture of what’s best for this campus,” Kornbluh said. “You paid attention to the breath of everything that happens on campus.”

Wilson said these senators have the opportunity to apply their experience on Senate to their lives.

“I wish the graduates the very best in the next chapter wherever that may be and I believe that you’ll find that the leadership experience here at Wayne State will serve you well for the rest of your lives,” Wilson said.

After dinner, Senate President Sailor Mayes and David Strauss, dean of students and faculty advisor to Senate, each spoke. They discussed the work Senate has accomplished this year, despite the challenges of the COVID-19 pandemic.

“We have overcome and triumph(ed) together and had a lot of good initiatives,” Mayes said. “Some, but not all, include (that) we finally launched the menstrual products pilot program, which will continue to help students who menstruate, we established the center for sexual assault and violence, which is essential for students, and we created a mental health week on campus in the fall and winter semesters.”

Strauss showed his appreciation of Senate’s accomplishments through a poem.

Special awards were presented by Hammoud on stage. Each senator received an award, gift bag, and graduation cords from WSU.

Awards included an award for serving six years on Senate for Jasmine Coles, a #1 bestie award for Strauss, President’s Award for Mayes, and Ally of the Students Award for College of Nursing Dean Laurie Lauzon Clabo.

Clabo valued her time working with this Senate during the pandemic, she said.

“I’m much more grateful for the collaboration we’ve shared over the past two years,” Clabo said. “I’ve learned so much about leadership from working with talented student leaders of senior commitment and wanted you to know that you are leading a safer, healthier, and more improved organization for the students.”