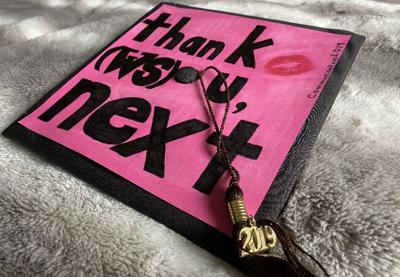 For many students, graduation means more than completing university. For Sara Elhasan, it was the promise of higher education amid Detroit’s heterogeneous, midtown landscape that attracted her.

“I was really drawn to Wayne State. It’s in midtown Detroit and that was always really exciting to me because it’s very different from the city I grew up in,” the Dearborn native said.

“While we plan to invite you to a formal commencement ceremony when it is safe and practical to do so, for now, modifying the spring celebration was a necessary public health measure,” President Wilson stated.

Elhasan said campus visits and conversations with students helped solidify her decision to attend WSU. She enrolled after graduating from Fordson High School in 2016. Now, four years later, she’s a senior filled with enthusiasm and apprehension.

“I was excited to be spending my last year with my friends that I’ve been with for so long,” she said. “I was ready to close a chapter, wrap up loose ends and move on.”

Elhasan said she spent last fall applying for graduate school and preparing for professional conferences in her field.

She’s joined by many Warriors who worked hard to earn degrees in their chosen fields this year.

International student Laith Rafidi said he prepared himself for a difficult year academically, but never anticipated the other ways life could be interrupted.

“I walked into this year feeling really intimidated because I knew it was going to be hard,” Rafidi said.

Rafidi is from Palestine and said making his parents proud was a motivator to graduate a semester early.

“I was feeling ecstatic, too, because I’ve honestly been working and grinding towards (April) graduation,” he said.

With permission from his adviser, the computer science student enrolled in 18 credit hours and tested out of an additional 14.

The general feeling of optimism shared among WSU’s graduating class of 2020 quickly changed on March 10 when Michigan’s first two COVID-19 cases were reported.

“Slowly but surely, everything started getting canceled or postponed,” Elhasan said. “I prepared myself for the fact that graduation would most likely be canceled.”

Colleges and universities across the country scrambled to accommodate students in the midst of an unprecedented global health crisis. As WSU’s administration worked to clear campus, students and professors adapted to online learning.

Fortunately, Elhasan’s plans to study public health and epidemiology at the University of Michigan in the fall are still intact.

Rafidi will also return to WSU at the same time to complete his master’s degree in software engineering, concentrating in artificial intelligence and machine learning. He plans to walk across the stage for that degree.

Elhasan said her time at WSU has prepared her for the world she’s about to step into.

“I anticipated it (the COVID-19 outbreak) being pretty bad, but I think I felt a lot calmer knowing that it has to get worse before it gets better,” she said. “That’s what’s helped me remain optimistic.”

She also said the country’s lack of response and preparedness is frustrating for her.

“And that’s ultimately, what public health emphasizes through its entire curriculum. If nothing else, I think this entire pandemic has put a spotlight on the field. That job security is really a big thing these days,” she said.

Still able to smile through all of this semester’s surprises, she’s keeping her sense of humor.

“It’s also really interesting that people will not be asking me what public health is anymore.”

President Wilson’s office will announce a new date for commencement. Students in need of career placement services can still receive remote resources available on their website.