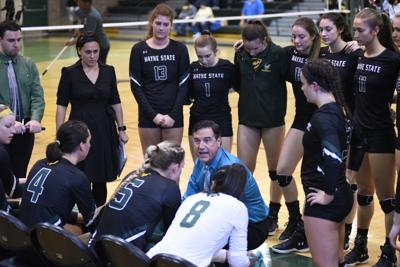 Wayne State volleyball will look to qualify for postseason play for the fourth consecutive year when they begin their season on Sept.5.

Last season WSU qualified for the postseason with a 15-13 record, while posting a 10-6 mark in league play.

WSU advanced to the Great Lakes Intercollegiate Athletic Conference Tournament where they were eliminated by Saginaw Valley State in the quarterfinals.

“Every season gives a player experiences that they can draw on as their career progresses,” Koth said. “These returners can take away valuable lessons from how we handle certain situations both individually and as a team.”

Koth said the team’s depth at most positions stood out during camp as the team trained for the upcoming season.

“We are very athletic (and) pretty deep at each position, and they definitely came back in pretty good shape, which allowed us to stay on track with our training expectations,” he said.

“All four opponents are from within our region, which makes the results important (for) our chances of making the NCAA Tournament at the end of the season,” Koth said. “The biggest challenge is that we won’t know much about them so we will have to adjust on the fly.”

Koth said he hopes to see the team bring what they have done in practice into game action as they start the season.

“Really, I am hoping to see carry over from what is happening in practice on a daily basis to what happens in live competition,” Koth said.

Koth said the team’s goals for the season are to play in the conference tournament and to have a chance to qualify for the NCAA Tournament.

“We have a standard expectation with Warrior Volleyball of competing in the GLIAC Tournament, which ultimately means we have a chance at a conference title, giving ourselves a chance to make the NCAA Regional,” Koth said. “So that is our goal this year. We have made the GLIAC Tournament three straight years and have been in the conversation each for the NCAA as well (so) we are hopeful of taking it one step further in 2019.”

Matt Williams is sports editor of The South End. He can be reached at mattmwilliams86@gmail.com.Photo courtesy of WSU Athletics.