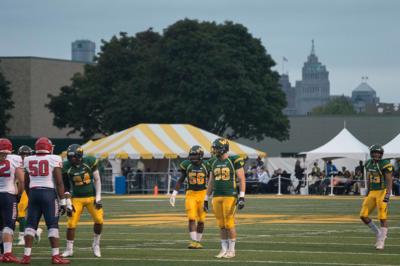 After Wayne State football dropped their second game of the season, a 35-12 defeat to Truman State on Sept.14, head coach Paul Winters said the team was not pleased with how they played during the game.

“We played poorly (and) we gave them two touchdowns that were just senseless,” Winters said. “We played as poorly as we have probably in years and we were angry about it.”

However, Winters said the team showed progress in the week leading up to their next game against Quincy University.

“One of the things that happens when you lose a game is that you give a lot of points or you don’t play well on offense, you really focus on ‘What did I do wrong?’ (or) ‘What did we do wrong?’” Winters said. “And (doing that) allowed us to focus on a couple of things that made us a better football team.”

The 33-7 win over Quincy ignited WSU’s strong finish to the season, as they won seven of their final eight games; went 7-1 in league play to post a second-place finish in the conference, and nearly played their way into the NCAA Division II playoffs.

Winters said a wakeup call for the team heading into the final portion of the season was the game against Ashland University on Oct.19, where the team surrendered a 28-point lead before winning 42-41 in double overtime.

“I look at it as the way we won it actually propelled us more than winning it big,” Winters said. “I think had we won the game 42-14, we might have gotten over-confident. It’s interesting you win a game like that and think you have to play better (but) it made us a more complete team.”

WSU notched numerous conference postseason honors as Winters was named Coach of the Year, making it the third time he has received this honor, and graduate running back Deiontae Nicholas was named Offensive Back of the Year; becoming the first WSU player to receive the award since 2007.

While each football season stands on its own merits, Winters said the team can build off what they accomplished this season.

While the team’s 8-3 record wasn’t enough to qualify for the playoffs, Winters said having this year’s senior class win their final game versus Grand Valley State University, breaking the team’s long losing streak to the Lakers, and recapturing the Wooden Shoes Trophy was the perfect way to end their careers.

“To win that trophy, that says you did something that no Wayne State team has done for 35 years,” Winters said. “That’s an incredible feeling for those seniors (and) they’ll have that the rest of their lives.”

Cover photos by Jonathan Deschaine. Jonathan is the multimedia editor for The South End. He can be reached at jonathan.deschaine@gmail.com.