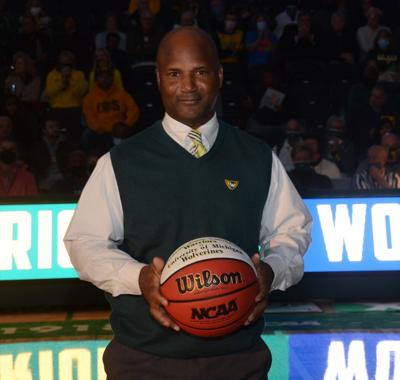 Greer said retiring after 21 years in the position was the best choice for himself, according to a Nov. 17 statement.

“I just thought the guys needed another voice,” Greer said in a Nov. 23 interview with The South End. “I always would do that (retire) if I ever got to the point where I didn’t have the passion to get up in the morning to tackle the day.”

Greer said he realized during offseason practice that his drive was diminishing and that he wouldn’t benefit the team anymore.

“If you can’t get excited about going to practice and represent the university, then you’re cheating yourself, so I refuse to do that,” Greer said.

Greer said he assessed the team and his plan for retirement at the end of the previous season.

“You always evaluate things at the end of every year like I’ve done for my whole career to see where I’m at,” Greer said. “We were building a brand new arena, opening the arena with my athletic director (Rob Fournier) and some of those duties, it just wasn’t there. You wouldn’t know the passion wasn’t there until you started practicing.”

Over the course of his career, Greer built close bonds with his players, said redshirt senior guard Darian Owens-White. Finding out about Greer’s retirement on such short notice was a shock to the team.

“Greer was my coach my whole four years here,” Owens-White said. “So I’ve been with him since I’ve been in college. He taught me how to play college basketball so it felt like a death in the family.”

Greer currently holds the WSU record for most basketball coach wins and was also selected GLIAC Coach of The Year in the 2012-13 and 2020-21 seasons.

“He always just wanted to get young men their degree. That’s all he really cares about, making sure me and my teammates graduate and be the best players we can be,” Owens-White said. “I think that’s what all coaches should be.”

Redshirt junior forward Avery Lewis said that he was grateful for his experiences with Greer, though his time playing under Greer’s leadership was limited.

“I’ve known Coach Greer basically since I was 12, watching him coach my brother,” Lewis said. “Unfortunately I was only with him for a year but we did really well last year since we won the regular season championship at home. That’s going to be the biggest memory I hold onto.”

Greer said Haralson’s experience in WSU’s basketball program prepared him to lead the team this season.

“He’s as solid as they come. He’s been with me for 18 years,” Greer said. “Quite frankly I didn’t do it for these particular reasons but he deserves a chance to go through the show, coaching.”

Lewis said that he and his teammates were struggling to cope with Greer’s sudden retirement but were comfortable working with Haralson.

“As much as it hurts seeing Coach Greer move on and retire, we’re all there with Coach E (Haralson). We trust him,” Lewis said. “A lot of the guards like him and he’s a younger coach so he can relate to some of the stuff that we go through.”

Greer said that he believes the team will be successful under Haralson’s leadership this season.

“He’s helped recruit most of those kids,” Greer said. “So I have the utmost confidence that those guys can defend their championship. It won’t be easy with new practices and all, but once they are over the initial shock, they will.”