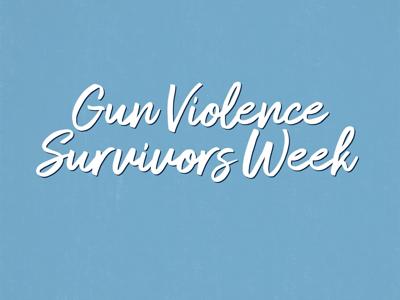 Thirty-one days. In just about 31 days, ​more Americans are killed with guns than are killed in other high-income nations i​n an entire year. Tragically, our gun death rate is 11 times greater than that of our peer countries.

Every day, more than 100 people are shot and killed in our county, and 200 more are shot and wounded. Gun violence is our generation’s war. More people in America die by guns per year than the number of U.S. service members killed in action in Iran, Iraq and Afghanistan combined in the 12 years between 2005 and 2017, according to Everytown for Gun Safety. Gun violence is also the leading cause of death for children and teens in the United States, and it takes a disproportionate toll on Black and Latino children.

But the effects of gun violence go far beyond these startling statistics of those who have been physically wounded with a gun. The persistent threat of gun violence in our communities, in our homes and in our schools leaves a traumatic mark on our lives. Fifty-eight percent of American adults —or someone they care for— have personally experienced gun violence in their lifetimes: whether they have witnessed an act of gun violence, been threatened or wounded with a gun or had someone they cared for wounded or killed with a gun. This majority of Americans is comprised of countless stories from parents who never got to kiss their kids’ goodbye, gunshot victims living with physical and emotional wounds and entire families heartbroken by suicide.

Millions of Americans have experienced gun violence, yet as a society, we still struggle to grasp the toll of the crisis beyond the mass shootings that make the headlines. From domestic violence and police violence to city gun violence, hate crimes and suicide — gun violence in any form can leave a lasting impact on our lives.

To help Americans acknowledge their own personal connection to gun violence and realize the power of their voice, we recognize the first week of February as National Gun Violence Survivors Week.

Feb. 1-8 will mark the third annual N​ational Gun Violence Survivors Week​, a week focused on sharing and amplifying the stories of gun violence survivors who ​live with the impact of gun violence every day of the year.

For the duration of this week, Wayne State University Students Demand Action is highlighting Everytown For Gun Safety’s Moments That Survive, a ​year-round digital storytelling site and campaign in which Americans across the country share defining details of their experiences, in their own words — objects, places, or actions that take on a new meaning about how their lives have changed forever after enduring gun violence. Moments That Survive builds community among gun violence survivors and helps the public understand how everyday life changes as a result of gun violence. Survivors and supporters can also share their stories on social media using the hashtag #MomentsThatSurvive​.

If you are interested in joining the movement to end gun violence, please join Wayne State University Students Demand Action. We are part of a national initiative created to channel the energy and passion of students into the fight against gun violence. We work on campus and within the City of Detroit to educate others, register voters, and demand common-sense solutions to this national crisis.

For more information about upcoming events, you can find us on Instagram @WSUStudentsDemandAction.

Megan Dembrowski is the president of WSU Students Demand Action.