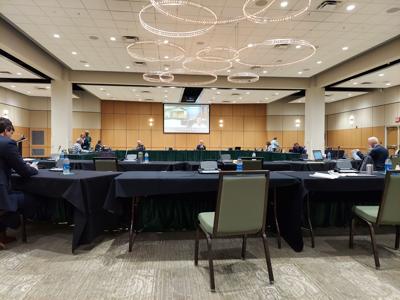 The Wayne State Board of Governors unanimously approved a 3.9% tuition increase for undergraduate and graduate students at a hybrid meeting on Friday.

The rise in tuition will take effect in the 2021-2022 academic year and could see students paying upwards of an additional $527 yearly out of pocket, said Tamaka Butler, senior associate vice president of Finance and deputy chief financial officer.

BOG Chair Marilyn Kelly said the choice was made after heavy deliberation.

“We are unanimous in stating publicly that this is a decision not arrived at easily or without reservation,” Kelly said. “As the governing body of the university, we are keenly aware of the financial burdens many of our students face. We have committed the university to making its programs financially accessible to all, including those of limited means.”

Butler presented in favor of the tuition increase during the Academic Affairs Committee meeting. She said WSU’s current finances would not be feasible in the future.

“We had a net budget shortfall of $12.5 million dollars, which the board approved last year to fund from the rainy day reserves,” Butler said, “which, for the long term basis, is not a sustainable way to balance the budget. It doesn’t address the structural deficit, which would officially just roll over to the next fiscal year.”

Butler said WSU will continue emphasizing the importance of monetary support for all students.

Butler said the tuition increase would not impact FAFSA recipients who have between zero and $5,000 in expected family contribution, due to current WSU financial aid programs.

According to FAFSA, Expected Family Contribution determines how much financial aid a student needs based on their family's taxed and untaxed income, assets and benefits.

“Our Wayne Access and Heart of Detroit tuition pledge programs ensure that 100% of tuition and fees are covered for this population,” Butler said.

President M. Roy Wilson said no additional tuition increases will be made for the School of Medicine. The BOG previously approved a tuition increase at its May 1, 2020 meeting.

Wilson said WSU would carry on the university’s mission, despite its business shortcomings.

“No matter what the financial circumstances are, our priority remains the same,” Wilson said. “As stewards of the university, we will provide a high-quality education to as many students as possible, while continuing to feed the talent pipeline to ensure Michigan’s workforce and economy are strong in the years ahead.”

Staebler said he predicted WSU would be able to complete this deal at a lower cost than its current proposal of $600,000. A significant amount of funding for the new passes would come from decreasing funding for campus shuttle services.

“Based on the conversations as recent as yesterday, I think $450,000 to $500,000 seems to be a reasonable estimate for the first year or two,” Staebler said. “The money from this is largely going to be coming from a reduction in our shuttle services that are largely redundant to where this transit goes."

Staebler said the third year could be more expensive because DDOT and SMART are working to upgrade their fareboxes for increased convenience when purchasing a ticket. The changes are expected to be complete within 18-24 months, Staebler said.

“As a public institution, I think we have an obligation to support and invest in public transit,” Staebler said. “It’s another way to help folks through the Heart of Detroit scholarship fund. It says that you can both afford to go to Wayne State and that we can help you get to Wayne State. Of course, this is regional, so the SMART buses which take you from the suburbs work really well."

Senior lecturer in Russian Laura Kline said she is resigning from WSU. Kline said her decision was motivated by lack of support from the university.

“Unfortunately, Wayne operates too much like a business that doesn’t care enough about its product,” Kline said. “It’s rushing students through and ignoring its commitment to Detroiters to improve graduation rates. It’s sacrificed quality for quantity and statistics."

Kline said she had grown frustrated with WSU’s treatment of professors.

“Every February, dozens of excellent instructors receive demeaning non renewal letters instead of recognition and support. The power and responsibility to turn this situation lies with you, the Board of Governors,” Kline said.

Other actions taken at the BOG meeting include:

- Unanimous approval of up to $1.29 million to Thermo Fisher Scientific to acquire an Orbitrap Eclipse Tribrid Mass Spectrometer to be housed in the Proteomics Core Facility.

- Unanimous approval of spending up to $825,000 to provide improvements to the Beecher House. Improvements include new system air handlers, a modified heating system, new air conditioning and changes to the exterior of the building.

The next BOG meeting will be held on Oct. 1.