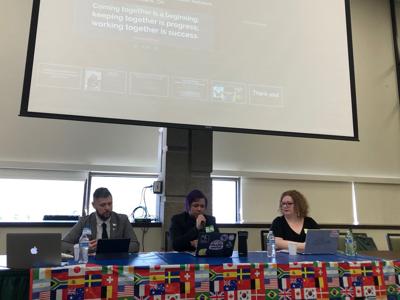 Voice, identity and inclusion were the main topics of discussion during the first student-led diversity conference at Wayne State.

The two-day conference was led by the WSU Communication Graduate Student Association, and welcomed over 100 people on Feb. 28 and 29 in the Student Center Ballroom.

“I want people to expand their mindset when it comes to what it means to be a part of a diverse community and to just understand more of the issues that are going on from different perspectives and maybe help figure out how we can solve these issues,” Seay-Howard said.

Faculty members and graduate students discussed the importance of recognizing the barriers between students and instructors.

“When we start looking at how to welcome people into a classroom, I think it becomes very easy for instructors to assume that everyone is sort of the same demographic,” said Corinne Duwe, WSU public relations graduate student. “I think it is important for there to be more questions than there are assumptions.”

Awareness by faculty of the language type and terminology used in classrooms is critical, panelist and WSU student Brianna Warren said.

“When I think about diversity in classrooms and having a fully inclusive environment, I usually think of prioritizing communication above all else,” she said. “Many times, when people think about allowing for all kinds of communication, they think of allowing for different types of languages to speak, and while that is very important, please remember that, especially when it comes to disability, language does not mean the same thing to every person out there.”

Something as simple and reasonable as “please place your cell phones away for the duration of the class” could exclude those who are non-speaking, partially mute or selective mute, Warren said.

When instructors openly share parts of their identity in their classrooms, it encourages students to be themselves as well, said AC Panella, a communications instructor from Santa Rosa Junior College in California.

“When I got hired at one of my earlier campuses, I, not shockingly, was a very out and queer person on campus,” Panella said. “I found that when you are marginalized and there are not visually marginalized people on your campus, students will come out of the woodwork to find you.”

He said students were showing up to their offices for support.

“While this was happening to me with queer students on campus, across campus, one of my colleagues who came from an undocumented background was having a very similar experience with her undocumented students,” he said.

“Wayne State is one of the most diverse campuses in Michigan, but that doesn’t really say much. Inclusivity is really the important thing (and) empathy is the important thing,” Cam Blackwell, a WSU theater major who performed at the conference said.

“The campus can be as diverse it wants to be, but if we’re not actively having conversations and talking with each other to really understand each other, as humans, then what’s the point?” he said.

“We live in a world that avoids conversation in things that may be challenging,” he said. “I need people to ask and I have no problem telling.”

Cover photo by Nour Rahal. Nour is a contributing writer for The South End. She can be reached at nrahal1@wayne.edu