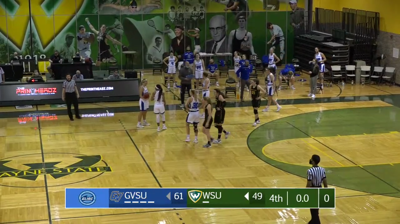 The Wayne State University women's basketball team was swept in their series against Grand Valley State University at the Matthaei Center. WSU lost their first game 66-57 on Jan. 30 and their second loss came on Jan. 31 with a 61-49 final score.

GVSU has been a continual source of problems for WSU women’s basketball. Dating back to 2003, WSU has suffered a total record of 4-24 against GVSU with 11 successive losses. This season’s batch of games offered much of the same that many have come to expect from this series.

Head Coach Carrie Lohr said it was important to be aware of the team’s physical rehabilitation, while also being aware of how difficult their schedule looked.

“It’s important to be cognizant of the point of recovery, I just think we hit some of our toughest opponents in maybe our worst time, emotionally and in the middle of trying to revamp some things,” Lohr said.

Having an emphasis on their recuperation allowed for junior guard Kate Sherwood and junior forward Sam Cherney time to recover from leg injuries and return for Saturday’s game.

The early goings of Saturday’s matchup subverted the expectations that prior games had set. WSU jumped out to an early lead in the first quarter off their efficient rebounding and scoring.

The second quarter presented much of the same, with WSU surprisingly extending their lead to 10 points. What really put WSU ahead in the first half was their ferocious defense, attacking GVSU every chance they had.

Lohr said she was proud of Miller’s effort and saw it as a point that everyone can continue to build on going forward.

“You can’t turn away from our hard effort. People are making some sacrifices, and there’s a new role for everyone, like Alexis. It’s not going to happen overnight, but it’s something I’m optimistic of if we continue to compete the way we did against Ashland and Grand Valley,” Lohr said.

After halftime, GVSU began closing in on the lead as WSU could only muster six points from their offense in the third quarter.

Later, with six minutes left to go in the fourth quarter, WSU let go of their lead after allowing a layup in the open court. WSU never recovered after losing the lead, ultimately allowing an 18-8 run from GVSU to close the game.

Despite losing on Saturday, there were still some positive takeaways for WSU. For example, Cherney put up another double-double on the season, as she scored 18 points and had 16 rebounds as well. Senior forward Tori Perez also grabbed 10 rebounds, the most for her since their opening day matchup against Lake Superior State University.

Lohr said she was proud of her team’s effort on the boards and ability to unify through what has been a tough time.

“We can’t grow impatient. We’re working hard and staying together. We’re right there, I just don’t think our results are because of our lack of effort at all,” Lohr said.

However, the game on Sunday was a mere continuation of the events on Saturday, a good effort from WSU but with far too many costly mistakes. Turnovers and sloppy ball-handling posed one of the biggest problems for WSU over the weekend.

Lohr said she noticed the obvious deficiencies on offense but was not too torn apart by seeing the turnovers. She said it was simply a case of WSU forcing too many plays once again.

“That turnover column is not a bright point, but it’s correctable. They’re trying to make things happen. We just have to continue to try to minimize that issue. The goal for us just has to be to manage the game better,” Lohr said.

Over the course of this series, Miller nearly garnered as many turnovers as she had all season. She committed six turnovers on Saturday and Sunday, totaling 12 turnovers. Before these games, she had only accounted for 14 turnovers the entire season.

Lohr said she attributed WSU’s turnover problems to the new expectations they’ve had to fill since junior forward Grace George was sidelined with an injury.

“I think they’re being asked to step into a bigger role. I think all of us this week were trying to identify their new roles. Alexis and Rebecca [Fugate] are really doing some good things for us in the absence of Grace,” Lohr said.

Despite facing down their fourth loss in a row, Lohr said she was confident her team could recover and pick up some wins soon.

“We need to put this behind us and continue to get better. There are some more games out there that I know we can win,” Lohr said.

WSU women's basketball will have an opportunity to do just that as they travel to Hammond, Indiana, for their series against Purdue University Northwest on Feb. 5 and Feb. 6 at the John Friend Court.