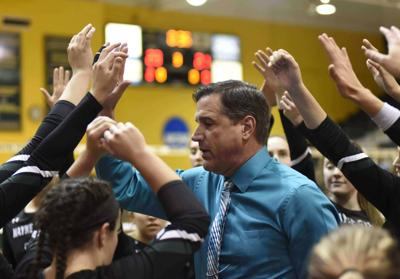 Wayne State volleyball completed the final day of the Warrior Invitational with two matches against University of Southern Indiana and Malone University at the Matthaei on Sept. 14.

WSU raced out with a 6-1 lead in the first set versus USI and maintained their advantage throughout the period. After the visitors cut their deficit to 23-22, a kill by junior Olivia Fike and a service ace by freshman Maddy Benoit gave WSU the set win.

WSU jumped out to a 14-8 lead in the third set and were able to maintain their advantage throughout the period to win 25-18 and seal the match victory.

In game two, both teams traded points for most of the opening session before the Pioneers used a 6-1 run to pull ahead 19-15. MU would go on to win the first set 25-18.

WSU would pull ahead of the visitors in the second set as contributions by Fike, senior Madelyn Krenz and redshirt sophomore Lauren VanderWal helped the home team even the match with a 25-17 set victory.

In the third set, MU jumped out to an 18-11 lead and withstood multiple runs late in the period by WSU to post a 25-23 set victory and take a 2-1 advantage.

The visitors jumped out to another 18-11 lead in the fourth set before WSU staged a comeback and led 24-23. Both teams alternated match point opportunities before back-to-back Pioneer errors gave WSU the set win and forced a fifth set.

In the final set, Malone jumped out to an early 6-1 lead and would maintain their lead to seal the match victory.

After the game, Wagner and Fike were named to the All-Tournament team. By splitting its two matches on day two, WSU (5-3 overall) finished the tournament with a 2-2 record.

WSU will continue its six-game home stand by opening conference play versus Wisconsin-Parkside on Sept. 20 with the match slated to begin at 7 p.m.

Matt Williams is the sports editor of TSE. He can be reached at mattmwilliams86@gmail.com