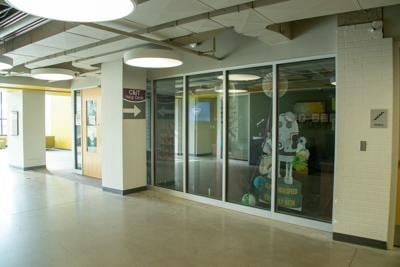 Rob Thompson, interim chief information officer and associate vice president of C&IT, said this project to remove all desk phones from campus and replace them with Microsoft Teams initially started in May 2021.

“We realized that faculty and staff in particular had learned a better skill set for communication between each other and within Teams,” Thompson said. “It really created an opportunity for us to take a look at ways that we can modernize our voice systems on campus.”

The transition will replace desk phones with a more mobile friendly version of communication connected to Microsoft Teams, Thompson said.

“We’ve since been working with our purchasing department on creating our requests for proposals from companies to figure out what technologies are out there that could help us (reform phone systems) well,” Thompson said.

The project was set to begin with a trial round in January to observe its performance. However, Thompson said in a Feb. 27 email to The South End that the contract with the vendor will be finalized in early March, and early adopter groups will begin to transition to the new software before the end of March.

Dean of Students David Strauss said he supports the plan and has found it useful.

Strauss said the project will provide WSU with a more cost-effective form of communication. Thompson said the savings of the transition will be significant, at over $500,000 a year.

Thompson said the program will roll out in phases and affect departments one at a time.

Strauss said the transition might be challenging for faculty, but it will be beneficial.

College of Liberal Arts and Sciences Associate Director of Marketing and Communications Jessica Archer said the transition will not impact her day-to-day functions.

“I can't tell you the last time I used my desk phone, to be honest,” she said. “I almost exclusively use (Microsoft) Teams, Slack and Google Voice for work communications.”

While Strauss supports the project, no form of digital communication compares to being in-person, he said.

“The technology we have been provided to work virtually has been excellent, including Microsoft Teams and the university Zoom account,” Strauss said in a Jan. 27 email to TSE. “However, nothing replaces being in person to stop into someone’s office with a question, or to brainstorm an idea, or to see someone on campus.”

Thompson said he believes the transition will benefit all faculty on campus.

“I think (the transition) is going to impact everybody positively, and in a way that makes it so that they’re better able to leverage what's out there and systems that we have at our disposal to communicate better,” he said.

Ashley Harris is the arts and entertainment editor for The South End. She can be reached at artsandentertainmenttse@gmail.com.