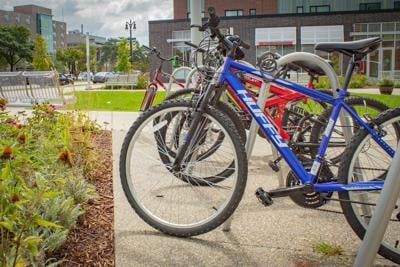 The Wayne State University Police Department removed abandoned bicycles from the University Towers bike racks on Aug. 16. The project was a joint effort with Wayne State Housing and Residential Life to create space for new students.

Residents of UT were given 30 days to register their bikes with WSUPD or face removal. WSUPD offers free bike registration available at the campus police station.

The project only focused on the racks outside of UT, Lt. Rana Eljaafari said, as the building has had a problem with bikes left abandoned on racks for the past three years.

“There were rusted bikes, parts of bikes, and bikes that had been there forever,” Eljaafari said. “They were taking away all these spaces in the bike racks from all the new students moving in.”

Eljaafari said WSUPD cut the locks off of all unregistered bikes on Aug 17. Unclaimed bikes are being held at the WSUPD storage unit at 1200 Holden Street.

“If someone comes forward and says, ‘Hey I had a bike there and I was out of town and now it's gone,’ we can take them to the warehouse and see if we can help them locate their bike,” Eljaafari said.

Out of the 32 bikes on the racks at UT, 21 were determined to be abandoned and removed, Elijaafari said.

Associate Director of Residence Life Katie Turner said the UT initiative was a success and she would consider it again in the future.

“I would look to do this again next summer as it has been a clear and immediate increase in convenience for students that use their bikes regularly and need a place to lock them,” Turner said.

Grace Arnold, third year biomedical engineering student and UT resident, said the project and other housing improvements happening on campus are helping to improve everyday life for students on campus.

“I think it shows that housing cares about the people who live here and wants to make sure we have clean and up to date facilities,” Arnold said.

Turner said that she believes cleaning up the racks and freeing up space for students will encourage more bike transportation on campus.

“I have observed many students locking up their bikes or unchaining them to take off in the morning even within the last week,” Turner said. “The area appears more organized as well, which I think will make for a better experience.”

Arnold said the removal of abandoned bikes was an overdue improvement for the building.

“The front of UT looks a lot better now that the bikes were removed,” Arnold said. “This is the home for many students and having old bikes sitting out front made it look gross and abandoned.”

Theresa De Benedetti is a correspondent for The South End. She can be reached at newsreportertse@gmail.com.

Cover photo provided by Jackson Meade, The South End's multimedia editor. He can be reached at multimediaeditortse@gmail.com.