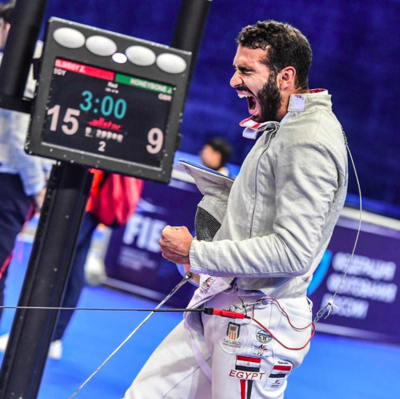 For former Wayne State fencer Ziad Elsissy, the chance to qualify for the 2020 Tokyo Olympics was an opportunity to fulfill a lifelong goal.

After falling one point short of earning a spot on the Egyptian National Team for the 2016 Rio de Janeiro Olympics, it was a chance at redemption.

“In the last few years, I have been waiting for July 2020 (and) a lot of effort and work has gone into this moment,” Elsissy said. “It was also my father’s biggest dream for me before he passed away.”

Following the end of the regular season, his focus shifted towards competing in the Olympics. However, the global spread of COVID-19 altered those plans.

“I was in the U.S. for practice for the African Championships (and) that’s when I got the news that all the airports in Egypt were closed,” Elsissy said.

With the postponement of the African Championships, Elsissy and those involved in the qualifying rounds were left to wonder how this would affect their chances.

“Whatever points I was going to get for the championship, I don’t know what’s going to happen with all of that,” Elsissy said.

Following their decision last month to postpone the Olympics until July 2021, on April 7, the International Olympic Committee said the delay wouldn’t impact athletes who already qualified for the Olympics.

The IOC extended the qualifying period, meaning Elsissy could get another opportunity to participate in the African Championships.

Elsissy and current WSU fencer Ahmed Elsayed earned spots in the Olympics as members of the Egyptian National Team.

WSU fencing head coach Jerzy Radz said this distinction is a big deal for the program.

“Only 34 fencers individually and eight teams qualified for the 2020 Olympic Games,” Radz said. “So for two of my students to be in the Olympics is very important for me (the) university and fencing program.”

“Qualifying is a great success for them and I will continue to motivate them and (let them) know what hard work, practice and a good mindset can bring.”

At the moment, Elsissy is limited with how much he can do with the shut down of gyms and training facilities.

However, he finds it essential to be ready for the moment where he returns to competition.

“I’m trying to stay in shape, work out, (do some) conditioning, eating right because you never know when everything is going to be ok and come back to normal,” Elsissy said.

“Maybe next month, next week, I always have to be ready.”

While he is staying focused on fulfilling his dream, the next step for Elsissy remains uncertain.

“I cannot imagine how everything is going to function after this ends,” Elsissy said.