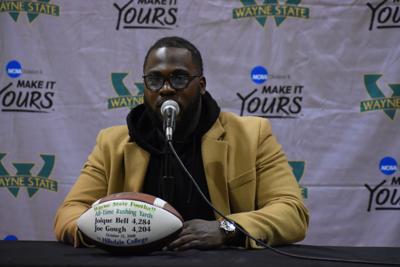 Former Wayne State and Detroit Lions running back Joique Bell announced his retirement from the National Football League at the Matthaei Physical Education Center on Feb. 27.

Bell, one of the players credited with turning around the football program, won the Harlon Hill Trophy in his senior season, as he rushed for 2,084 yards and scored 29 touchdowns.

After stints on the practice squads of the Buffalo Bills, Philadelphia Eagles, and New Orleans Saints, and Detroit Lions, Bell made the Lions active roster in 2012.

He played four seasons with the Lions from 2012-2015, before splitting the 2016 season between the Chicago Bears and Lions.

In his career, Bell scored 23 touchdowns with his best season occurring in 2014. Bell ran for 860 yards and scored seven rushing touchdowns.

Those accomplishments led to Bell becoming just the third player in the football program’s history to have his jersey retired in 2015.

While the evening was centered around his departure from the NFL, Bell also used the event to announce his future plans.

“I have a lot of people that still think I’m going to play or they ask me if I’m coming back,” Bell said. “But this is not about me officially retiring, but more so announcing my scholarships.”

Bell said his post-career focus is to give back to the community as much as he can.

“My whole goal with my non-profit, and me as a man, is to inspire as many kids as I can to go off to school,” Bell said. “Coach Winters always cared about me getting an education than playing football.”

Bell said the scholarships and non-profit work is an idea that he’s had for a while.

“If one kid gets my message and they can come out and be successful, and then they come back and they help out two or three kids, then I know that I’m doing my job,” Bell said.

Off the field, Bell started a real estate company and was influential in the city of Benton Harbor, his hometown, allowing cannabis dispensaries.

Bell credits his focus on community initiatives to a quote that made him wonder about how he would spend his time off the field.

“So, for me, being able to leave and change my environment, it gave me a way to fulfill my purpose.”

Irving Mejia-Hilario is a correspondent for The South End. Cover photo by Irving.