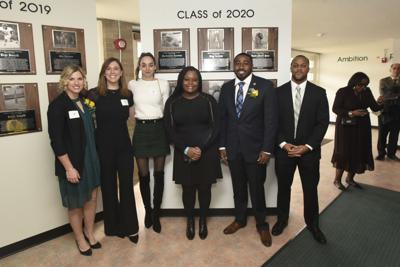 Six former Wayne State athletes were inducted into the WSU Athletics Hall of Fame in a ceremony held at St. Andrews Hall on Feb. 15.

According to Jason Clark, executive associate athletic director, the board of directors are provided statistics and information from WSU’s sports information staff. Those details help the committee select new members for induction.

Athletic director Rob Fournier said the six athletes made a significant impact during their time on campus.

“Some people make teams better, but the sign of a champion is someone who makes teammates better (and) that’s what these six did,” Fournier said. “The thing you don’t realize is really how great they (the inductees) are as people.”

WSU President M. Roy Wilson said he was proud of the inductees and the example they set for current student-athletes.

“Our student-athletes are working hard to follow in your footsteps,” Wilson said.

After finishing second in the 100-yard breaststroke at the conference championship in the 2012-13 season, Scott won the event three consecutive times. She became the first person to swim the 100 breaststroke below a time of 1:01.

“The fact that she (had) what it took to win that championship is what it takes to make the Hall of Fame,” Fournier said.

“There’s no greater feeling than being able to carry the title of student-athlete,” Scott said.

Throughout her career, Kortman never finished lower than fifth in any of the eight conference championship events she competed in.

“Growing up sports was always a big part of my life, but I never realized how far it would take me,” Kortman said.

In Azambuja’s swimming career, she earned 24 All-American certificates and 19 conference titles. However, getting to WSU was not easy for her.

“Carol went through a lot of doors to get to Wayne State (and) some people thought she might not be admitted,” Fournier said.

Once she was admitted, Azambuja made the honor roll three times and graduated in three and a half years with a degree in public relations.

Clark gave Azambuja the ultimate compliment when reflecting on her career.

“We’ve argued this many times but Carol is the best WSU swimmer, male or female,” Clark said.

A four-year letter winner for the football team, Viverette’s best season occurred in 2011. He recorded 7.5 sacks and led WSU 15.5 tackles for loss. Viverette helped the team earn its first-ever playoff berth and a spot in the NCAA Division II National Championship game, where he posted nine tackles and notched three sacks.

Smothers became the second player in WSU history to total 1,000 points, 300 assists and 300 rebounds throughout his career.

Smothers, now an assistant coach at Niagara University, said it was nice to return to campus for the event.

“This is part of where I started,” Smothers said. “My journey isn't over but it’s nice to come back to where it started.”

White said she attended WSU with the hopes of winning a conference championship and a plaque in the Hall of Fame.

“I wanted to be a part of a program that would end with a ring on my finger and my picture on the wall (and) they did not disappoint,” White said.

White helped lead WSU softball to three consecutive GLIAC tournament titles and played on the team that advanced to the College World Series in 2014.

The new inductees increased the number of athletes into WSU’s Hall of Fame to 255 members.

Jack Filbrandt is the arts and entertainment editor of The South End. He can be reached at artsandentertainmenttse@gmail.com.

Photos are courtesy of Jose Juarez.