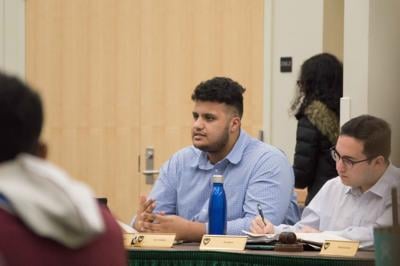 Senate invited Associate Vice President for Marketing and Communications Caroline Berry to discuss why it’s important for students to count themselves as Detroit residents for the census. Berry said Detroit’s 2010 census showed a huge population decline, which affected federal funding the city received.

“It counts where people are eating and sleeping most of the time. So that would mean as college students, you live in the city of Detroit right now,” Berry said.

According to the non-profit Data Driven Detroit, an organization that provides accessible information and figures about the city, Detroit’s participation rate fell from 70% in 2000 to 64% in 2010.

To help students participate, a census kiosk will be placed in the Student Center, she said. Berry hopes it will be installed by February or early March. She and others on the census team will be reaching out to find volunteers in the community soon.

Many students living on campus will already be counted toward the census through directory-improved information from the residence halls and WSU apartment buildings. But, Berry wants residents to fill out the rest of the information through the census form online or the Student Center's tentative kiosk.

Berry said the census's information is sealed for 70 years, and she wants students to know this. This means law enforcement of any type cannot be contacted about individuals who filled out the census. The only time law enforcement comes knocking is when information such as the number of individuals living at one residence is abnormal, or if your name is submitted multiple times, she said.

The Student Senate voted to pass a resolution supporting the Detroit Institute of Arts’s millage renewal. This resolution urges the greater campus community to vote in favor of the DIA millage renewal, which will be on the ballot this March. Voters in Oakland, Macomb and Wayne County will vote on whether or not to renew the 0.2 millage that helps funds the DIA. If passed, the DIA millage will continue through 2031, according to NPR.

The next Senate meeting will be on Thursday, Feb. 20 at 6 p.m in Hilberry A/B of the Student Center Building.

Regan Thorp is a contributing writer for The South End. She can be reached at regan.thorp@wayne.edu.