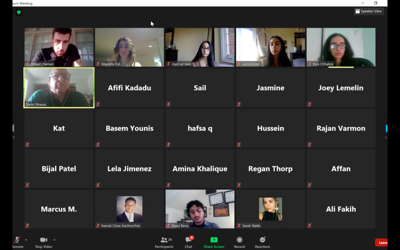 International students were concerned last month when the Department of Homeland Security released changes to the Student and Exchange Visitor Program for the upcoming semester, stating they must take at least one in-person course to remain in the United States.

This exemption was lifted and current international students are allowed to take all of their courses online and stay in the U.S. However, according to ICE’s guidelines, new students from out of the country are still required to have a minimum of one hybrid or in-person class to do the same.

WSU will accommodate students, but they “are dealing with another constraint now because of the travel restrictions, the airport closures and the closure of embassies and consulates that issue visas,” Associate Vice President for Educational Outreach and International Programs Ahmad Ezzeddine said.

WSU is assisting international students by developing a relief fund, with the coronavirus relief bill only supporting citizens, Ezzeddine said. Senior advisors, cabinet members and deans are puting 5% of their salary toward the fund.

Ezziddine said WSU is trying to supply as much aid as possible. Other options the university is considering include waiving tuition fees or providing scholarships.

A recent Fox 2 Detroit story was also discussed at the meeting. The story said that WSU has a lower graduation rate for Black students than the national average.

Dean of Students David Strauss addressed concerns about the story.

“We’ve received several national awards in recognition of our success in increasing graduation rates,” he said. “It’s the wrong story that’s being told.”

These efforts have been recognized by students, including Kamali Clora, Student Senate director of student services.

“I know there has been, and there’s always going to be, an enrollment issue for a lot of different communities —especially for members of the African American community,” Clora said. “That is a case that is prevalent in higher education, so I really think back to that Heart of Detroit Tuition Promise. I think that’s going to be something great if done and continued and sustained correctly can have a huge turnaround in a lot of this.”

Student Senate also addressed the explosion in Beirut that occurred on Aug. 4, killing at least 135 people and injuring 5,00, according to CNN.

Student Senate encouraged those who can donate to support Lebanese Red Cross, Impact Lebanon and reconstruction efforts for small businesses.