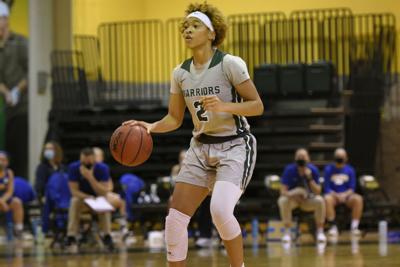 Wayne State University women’s basketball lost its second game in a row, suffering an 83-68 defeat to Ashland University at the Matthaei Center on Jan. 26.

Junior forward Grace George was ruled out indefinitely for the rest of the season after suffering an injury in WSU’s Jan. 23 matchup against Northwood University. Head Coach Carrie Lohr could not provide details on what kind of injury George may have.

Junior guard Kate Sherwood was also not available for Tuesday’s game due to a leg injury, according to Lohr. WSU is still evaluating the details of the specific injury she may have sustained. Lohr could not provide a timetable for Sherwood’s return.

Lohr said she knew ahead of Tuesday that their game against AU would not be easy. WSU was down their best two scorers and still reeling from the gut-punch of losing George for the season.

“I think it’s been emotional for our team. Grace is definitely a great basketball player, but she’s also a great leader. It’s a big absence, but it just looks a little different from what we’ve been doing leading up to this point,” Lohr said.

AU began the game, capitalizing off two turnovers in the game’s opening two minutes. Lohr quickly headed to a timeout after allowing a 6-0 run to AU to start the contest.

Coming out of the timeout, though, WSU came out with much more energy. Junior guard Alexis Miller and senior guard Anna Ruhstorfer led WSU on a 6-0 run of their own. Miller scored on back to back three-pointers, and Ruhstorfer assisted on both of them.

After tying back up at 6-6 at the three minute mark, AU took a hold of the lead and refused to let go of it for the remainder of the half. WSU hung on strong with good shots of their own, getting everyone involved on offense.

With only 33 seconds left in the first quarter, senior guard Kara Wilson hit the last of WSU’s free throws for the day. She brought her team to within two points, 24-22, but it signaled one of WSU’s biggest problems, an inability to get to the line.

Lohr said she was let down when looking at the statline. What jumped out to her was how many free throws WSU allowed, while simultaneously never getting to the free-throw line themselves.

“Obviously, we shot four free throws to their 21. So that’s putting a lot of points up for them that we just never got back,” Lohr said.

Wilson, to her credit, truly stepped up in her role on Tuesday. Despite being plugged off the bench with little time to prepare, she still finished the game with 10 points and 10 rebounds. This marked the first double-double of her collegiate career.

Lohr said she was proud of Wilson’s effort against AU.

“She really stepped up and showed some senior leadership. She really played an exceptional game, even playing out of position. She gave us everything she had,” Lohr said.

Following a sloppy end to the second quarter, featuring three turnovers from WSU and AU combined, WSU began turning the corner in the third quarter.Wilson started the quarter with a layup and WSU regained the lead for the first time in the game.

What followed was a back and forth exchange between WSU and AU, both teams struggling for the lead. WSU hit back to back threes from sophomore guard Rebecca Fugate, leading them into the final quarter only down by two points.

Even though WSU had momentum on their side to begin the fourth quarter and even led for the opening two minutes, they eventually relinquished the lead and never got a hold of it again.

Turnovers, a lack of drawing fouls and an excessive amount of fouls ultimately resulted in another loss for WSU, as AU scored 23 points to WSU’s 10 points in the final quarter.

With her head still held high, Lohr said she felt good about the execution from her team considering the circumstances.

“I was really proud of my team’s performance, to go on the road without two starters and play at a tough place like Ashland, we showed some toughness for three quarters. Unfortunately, I think the fourth quarter is really where we just missed our two starters,” Lohr said.

WSU has a challenging task ahead of them, as they now embark on the rest of their season without their top scorer. Lohr said she was confident WSU would begin to adjust as the season continues.

“We’re starting to see some more players really emerge. There’s definitely some positives, the performances of Kara, Alexis, Sam (Cherney). We need to build off that and get the rest of the team to mold into a new role. I’m optimistic,” Lohr said.

WSU will return to the Matthaei Center, with the hopes to gain control of the Great Lakes Intercollegiate Athletic Conference South Division as they face off against their rival, Grand Valley State University, on Jan. 30 and Jan. 31.