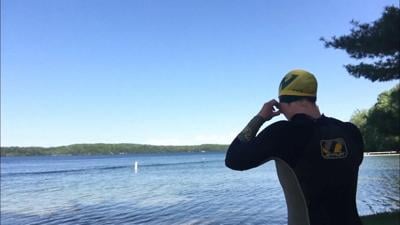 Volleyball sophomore Taylor Wagner said training without her teammates is a challenge.

“My workouts have been all over the place, which really isn’t ideal for me,” Wagner said. “I've lost enjoyment in working out. I'm used to working out with my team and having them there to motivate me.”

“Honestly, working out is boring now,” he said. “I used to like working out and I enjoyed being in the weight room.”

With the status of the fall season undecided, Wagner said she feels unmotivated.

“Now I’m struggling because I don’t have something to work towards,” Wagner said. “I don’t know if I’ll have a season in the fall.”

Roede said he notices a change in his body since working out remotely.

“I lost a lot of weight and strength and I can tell I lost muscles in my legs,” he said. “I can’t walk up the stairs like I used to.”

“Though we can stay active (with) cardio and strength training, we’re still losing a feel for the water,” Brunner said.

Whalen said it’s understandable that the shift in the athletes’ workout schedule impacts them mentally as well as physically.

“I think the pressure of being a student athlete —in normal circumstances— creates a really strong emotional response, but certainly in the absence of that, mental health also becomes a really important concern,” she said.

Wagner said the loss in structured training is difficult to overcome at times.

“As a college athlete, working out becomes a constant in your life,” she said. “That loss is really hard.”

Due to being unable to swim frequently, Brunner said she uses new exercise methods.

“It was difficult for me to adjust to life on land because my sport’s in the water,” she said. “I’ve recently taken up running and HIIT (high-intensity interval training) workouts. I’m limited to what I can (do) until the water heats back up.”

Wagner said she hopes her team can resume a normal training routine soon.

“It takes a lot of endurance to play volleyball,” she said. “I know we can get back to that level, but it’s going to take a lot of work.”

On May 19, the NCAA Division II Presidents Council voted to reduce the minimum number of contests required to receive sport sponsorship and championship selections by 33% for the 2020-21 academic year. The maximum number of allowed contests and dates of competition will be reduced on a sport-by-sport basis.

Put in place because of the pandemic, these changes impact WSU and other NCAA Division II programs.

Contingency plans around sports during the upcoming academic year are being developed, WSU  Senior Associate Athletics Director Jeff Weiss said. Schools are looking to local governments to decide how to safely reopen campuses.

“I personally think we are going to have athletics in the fall,” Weiss said.