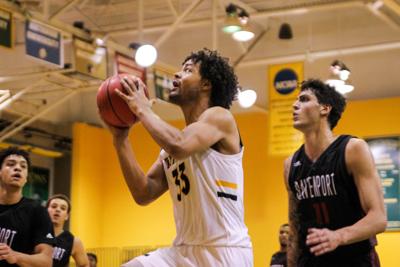 Wayne State University men’s basketball won its third game in a row, capping off a sweep against Purdue University Northwest. WSU won the first matchup 72-56 on Feb. 5 and the second matchup 92-89 on Feb. 6.

WSU postponed their Feb. 2 game against Grand Valley State University due to COVID-19 issues on the roster. The WSU Department of Athletics made the announcement on Jan. 28.

Under normal circumstances, WSU would watch film together and practice several times a week. In the lead-up to the weekend, WSU only got to practice and watch film as a team once.

Head Coach David Greer said postponing the games may have contributed to their victories over the weekend.

“It might’ve worked for us because we needed some rest. We’ve had a lot of guys logging a lot of minutes, maybe it was good for them to finally pause after all,” Greer said.

The game on Friday featured a first half that was sheer domination from WSU. For the first time this season, WSU shot above 50% from beyond the arc in a half as they went 7-11 from deep. Even on the defensive end, WSU forced 12 turnovers and scored 17 points off those turnovers in the first half.

Greer said he was extremely pleased by WSU’s performance in the first half.

“I thought on Friday, our first half was probably the best first half we’ve played all year. I thought the guys were really alert defensively, forcing all those turnovers,” Greer said.

The rest of the game was a typical affair. WSU never relinquished the lead and sophomore forward Avery Lewis posted his second double-double this season with 15 points and 11 rebounds.

Greer said throughout the course of the season, and especially on Friday, he was impressed by Lewis’s tenacity on the court.

“Avery has been an outstanding, high-energy player. He’s been our best rebounder and he does a great job running the floor and trying to get into a low-post position,” Greer said.

WSU also saw a breakout performance off the bench from sophomore forward Kylin Grant. He played a season-high 32 minutes and made his time count. Grant scored a season-high 10 points and notched another season-high with nine rebounds.

On Saturday, WSU got off to a stagnant start. For the game’s opening two minutes, WSU had a tough time scoring. WSU has struggled with a lack of consistency off the bench and it showed on Saturday, Greer said.

“The starters have been pretty consistent all along, it’s the guys coming off the bench that we need to work with. Grant and [Nate] Talbot came in and gave us some minutes, but we’re definitely gonna need some more bench production to give our other guys some rest,” Greer said.

WSU proceeded to lead for the remainder of the second half, although not without bumping into some opposition. With 35 seconds left in the game, WSU was leading 85-74 and it was safe to assume the game was over.

Suddenly, PNW’s offense awoke and knocked down five three-pointers to close the game. In the span of almost less than a minute, with four seconds left, the game was brought back to only a four-point deficit. Unfortunately for PNW, their barrage of three-pointers was not enough, as WSU hung on for a win.

Greer said WSU's success in closing the game was due to their experience with similar close matchups.

“It was a situation where they were just making threes and the basket starts looking like an ocean. But we learned our lesson from Northwood and we were able to make free throws. We just have to show up in those late-game situations,” Greer said.

Greer said he is optimistic about continuing this pattern heading into the future and looks to the final stretch of this season as an opportunity to resume a thread of good team performances.

“We gotta get back to the free-throw line and keep getting them into foul trouble. What we need to do is get quality shots and take care of the basketball going forward,” Greer said.

Their latest slew of wins propels WSU back to first place in the South Division in the Great Lakes Intercollegiate Athletic Conference and second place in the overall standings.

WSU will look to avenge a sweep from last season on Tuesday when they travel to the Grand Valley State University State Fieldhouse Arena to take on GVSU on Feb. 9.