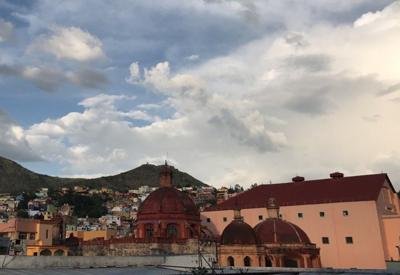 Today marks the start of Hispanic Heritage Month — a month where Hispanic heritage is celebrated and the country takes a month to remember, and thank, the Hispanic and Latino community for their contributions to the culture that shapes the community today.

As managing editor of The South End, and as a Mexican-American, I believe it’s important to do something for this month. It’s important to me because of the Latino population in Detroit and the community being influential for the city.

There are also many Latino/a students at Wayne State who are doing great things, and it’s important to take these students into account as well throughout this month.

Every week, The South End will be publishing an op-ed from a student talking about their experience as Hispanics in the U.S. and TSE will cover various events involving students or faculty from the Latin American Studies department at WSU.

TSE take pride in the diverse university we attend, and we want students' voices to be heard.

This is a great month to learn about the history of Latin Americans and remember the influences many activists had in the U.S.

During this month, Central America celebrates its independence from Spain on Sept. 15.

It’s also important to reflect on the Chicano Movement of the 1960s and 1970s. It’s important to remember the Brown Berets and the thousands of high school students who staged walkouts in protest of being treated unfairly by the public schools in Los Angeles.

It’s critical to understand the contribution of Afro-Latinos to the culture and music to countries such as Mexico and U.S territory Puerto Rico. From reggaeton to the Harlem Renaissance, knowing the stories of these people matter.

History and culture matter, and it’s what I hope our readers will appreciate and strive to learn more about the Latin American community.

I hope you all immerse yourself and enjoy this upcoming month where I hope you all learn and appreciate the cultures celebrated this month.

Susana is the managing editor of The South End. She can be reached at susana.hernandez@wayne.edu

This is an awesome motivating article.I am practically satisfied with your great work.You put truly extremely supportive data. Keep it up. tree trimming huntersville nc

I read your blog it's very nice thanks for sharing useful information with us. I'm Quickbooks proadviser if you have any issue related to Quickbooks to visit our website.

I read your blog It's very amazing when i see first time your post i'm very impressed thanks for sharing useful blog with us. for more information to click here. Bitdefender Central Login