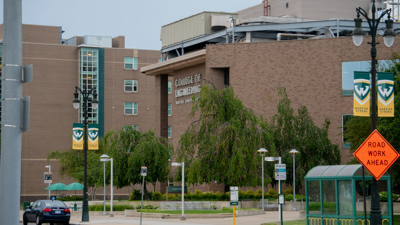 Wayne State’s College of Engineering will not let the pandemic stop the department from introducing a new bachelor’s degree starting this fall.

WSU will be one of only two Michigan universities to offer a Bachelor of Science in welding and metallurgical engineering technology.

Metallurgy is the study of metallic elements’ atomic structure and their properties when used in production, according to WSU’s website.

Around 25 to 30 years ago, WSU had a metallurgical engineering degree within the chemical engineering department – however, the university got rid of the program after a few years, said Ece Yaprak, professor and chair of the engineering technology division.

This program was developed after community colleges in metro Detroit reached out to WSU due to a lack of four-year degree programs for welding students in the area, she said.

Ferris State University is the only other Michigan university to offer a Bachelor of Science in welding engineering technology.

“So if they are working around the metropolitan area (Detroit) and attending community colleges to get a welding degree, they didn't have an option for a four-year degree,” Yaprak said. “To get a bachelor's degree, their choices were they had to move to either near Ferris State or another university that gives this degree.”

The degree will give students a wide range of welding and metallurgical knowledge, WSU alumnus and deputy district director for the American Welding Society, Mark Rotary, said.

“The metallurgy is such an important part of welding to begin with,” he said. “Metallurgy is very, very important in general in our industry (specifically) in the automotive industry. Because of lightweight and new materials and even electric motors, they're trying to go to materials that are not rare earth elements so that they're more readily available.”

For students already enrolled in this program, most lecture-based classes will be held online, Yaprak said. Socially-distant settings are being organized for engineering labs, holding four to five students at most.

Transfer students coming from a two-year welding or metallurgical program, with completed math and science credits, are the best candidates for this degree, said Joyce Lien, academic advisor for the engineering technology division. Freshman or first-time college students can benefit from this program by taking technical courses at a community college and then transferring them to WSU.

“We (AWS) give out scholarships every year that totals about approximately $70,000 a year,” Rotary said.

Students will be able to “dual path” their education with this degree —benefiting students new to welding or metallurgy and mid-level career individuals wanting to move to the next level of their professional career, Lien said.

“In this dual path, the students will learn the hands-on skills as a entry-level welding or metallurgical professional while, at the same time, academically learning the technical and engineering aspects of the profession,” she said.

Slone Terranella is a contributing writer for The South End. She can be reached at gh7510@wayne.edu.