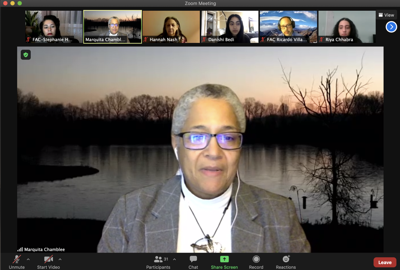 Editor's Note: This article has been updated to include a statement from Monica Brockmeyer, WSU senior associate provost for student success.

The Wayne State University Office of Diversity and Inclusion hosted an online dialogue for students and faculty to discuss the Jan. 6 insurrection on the U.S. Capitol by a mob of pro-Trump rioters.

On the morning of Jan. 6, President Donald Trump spoke to a rally of demonstrators in Washington D.C., echoing false claims of election fraud, according to the Associated Press. Trump incited protesters to go to the Capitol, where Congress was debating the electoral college votes. The rioters stormed the Capitol —bashing windows to enter, physically assaulting members of the press and law enforcement, as well as ransacking offices. Members of Congress and Vice President Mike Pence took shelter during the attack.

Five people died as a result of the riot, including U.S. Capitol police officer Brian Sicknick, who was beaten with a fire extinguisher by rioters and died in the hospital due to his injuries, according to The New York Times. Ashli Babbitt, a rioter and Air Force veteran, died after being shot by a Capitol Police officer while attempting to breach the Speaker’s Lobby in the Capitol. Several other rioters died of “medical emergencies,” authorities said.

The WSU event, held on Jan. 13, offered students and faculty a safe environment to discuss concerns about the riot and hopes for unity at WSU and beyond. The discussion was sponsored by the WSU Student Senate and Office of Multicultural Student Engagement.

Chief Diversity Officer and Associate Provost for Diversity and Inclusion Marquita Chamblee began the event with a moment of silence honoring lives lost to hate crimes, political violence and COVID-19.

Chamblee asked the first question at the event —how are you feeling in the aftermath of the mob riot at the U.S. Capitol?— which was discussed for 25 minutes in multiple private breakout rooms.

Prax said he is frustrated by the portrayal and treatment of the mostly-white rioters.

The first discussion of the event focused mostly on participants’ feelings of anger and fear regarding the riot. Carmen Albert, WSU senior Human Resources consultant, said she was shocked seeing the riot at the Capitol.

“I want individuals involved in this to be held accountable and hope that our justice system will not fail in this,” Albert said.

Albert concluded her discussion by asking how everyone can work to prevent further violence.

Following the first discussion, each breakout room reconvened, and Chamblee asked the second and final question of the evening, “What can we do as a campus community? What collective actions can we take to create greater understanding, inclusion, justice, compassion, and love?”

During the final session, key points from breakouts were addressed, including how to handle stressful news, raising up marginalized voices and handling conversations between people of different viewpoints.

Albert said she wants more students to feel free to express issues they have with the WSU administration.

After the final dialogue, Monica Brockmeyer, breakout room facilitator and senior associate provost for student success, said WSU faculty are devoted to making all students feel welcome and included within the campus community.

"Our sole purpose is to ensure the success of our students, that's one of the only reasons why we're here," Brockmeyer said.

Chamblee and other event facilitators stressed the importance of students attending WSU dialogues and said they hope more students will participate in future dialogues as the semester progresses.