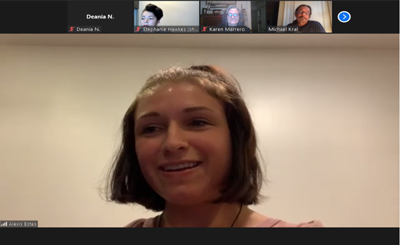 The panel focused on the importance of Native American history, allyship and the need for more Indigenous voices within the campus community. November is nationally recognized as Native American Heritage Month.

OMSE Assistant Director Stephanie Hawkes said WSU acknowledges that it was built on Indigenous land and honors all tribes with a connection to Detroit.

“Wayne State University rests on Waawiiyaatanong, also referred to as Detroit, the ancestral and contemporary homeland of the Three Fires Confederacy,” she said.

Panelists discussed how WSU can include more Indigenous voices on campus.

Michael Kral, associate professor at the School of Social Work, said he agreed with Marrero.

“Yes, what we need to do, and I do not know how they are going to do it for faculty and students, is to recruit Indigenous people and we need to do it actively,” Kral said.

Panelists discussed the significance of Thanksgiving for Indigenous communities.

“It is a holiday that we have off. But then also, is the National Day of Mourning for Indigenous people,” said OMSE Academic Advisor Kristin Johnston.

NASO Vice President Alexis Estes said growing up she saw many non-Natives use her culture as a costume in association with Thanksgiving.

Estes has met non-Natives who believe stereotypes that all Native Americans live in teepees or on reservations, she said.

Kral said ignorance is one of the major problems facing Native American communities.

The U.S. has a history of colonial violence against Indigenous peoples, Estes said.

“No amount of money or health care services can make up for the cultural genocide, and the loss of our relatives that has happened,” she said.

The panelists discussed the importance of non-Natives uplifting Indigenous peoples.

“For me, being an ally is standing aside and letting Native voices be heard, providing an opportunity to amplify the names of those voices, so for me, I'm trying to do that through my work,” Marrero said.

Johnston said Indigenous cultures and traditions must be normalized.

“If you are a big reader, find fiction and non-fiction books that uplift Native voices or watching different shows or movies, or if social media is your thing, find the right information within these hobbies,” Johnston said.

“This is especially an important time to heal some of that history, and that's what I feel like this allyship is about,” Estes said. “And it's especially important for those who are non-Indigenous and working with Native communities to know the truth, and to come from a place of birth of respect and equality.”

Deania Newman is a contributing writer for The South End. She can be reached at hh7155@wayne.edu.