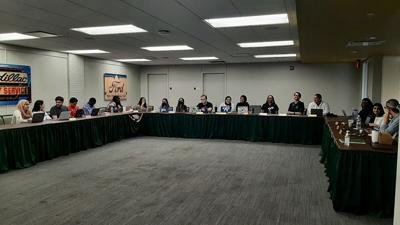 Editor's Note: This article has been updated with additional information to correct a factual error. Student Senate notified the public of their room change via an Instagram post.

A previous version of this article stated Senate failed to publicize the room change.

The meeting was originally scheduled to be held in the Student Center room Hilberry AB, but was later moved to the Student Center’s basement. An email was sent notifying The South End and individuals on the agenda of the room change 15 minutes before the start of the meeting and a post was made on Senate's instagram.

University Libraries faculty members Jill Wurm and Veronica Bielat introduced the idea of a family collaboration space in the Purdy Kresge Library for students who are parents.

“Some of our observations have been that people are not always comfortable coming in with their kids, especially young children,” Bielat said. “So we wanted to have a space for students to feel comfortable.”

Bielat said the space won’t be used as a daycare, but as a space for families to spend time together.

“Usually technology will be available for the kids to use because a lot of times kids and parents might be doing their homework together,” she said.

Senate discussed the policies for the family space such as: safety measures to prevent a child from being left alone, how the space will be utilized and what items could be used for children to enjoy the space.

Library Director Mike Hawthorne said policies are still in the works for the initiative, but library monitors who are already in the buildings will help with checking the room regularly for unattended children.

“A kid by themselves in the room, that's on a whole other level. So there will be a mechanism in place to ensure compliance,” Hawthorne said. “We won’t catch it all but hopefully over time, there will be an awareness of how important it is.”

Bielat asked for support from Senate to have members join the committee for facilitating library space. This would include the planning of the new family space.

Senate is expected to have a Senator join the initiative with University Libraries, President Yousra Zouani said.

Other initiatives discussed at the meeting included programs that applied for grants from the University Assessment Council, Festifall preparation and a new initiative for new artistic spaces in the Student Center.

College of Nursing Representative Veronica Fahmi said she met with Provost Mark Kornbluh and Hasan Elahi, newly appointed Dean at the College of Fine Performing and Communication Arts, on July 29 to discuss more available spaces for the arts and performing arts.

“I gave the example of being part of the swinging dance club last semester and we were never able to practice in the Student Center because it was always fully booked, so we want to increase availability for the dance groups too,” Fahmi said.

Fahmi said she will continue the discussion regarding art spaces with Kornbluh and CFPCA.

Dean of Students Dean Strauss told Senators there will be an increased amount in activity awards for members as compensation for their work.

Students that join Senate in the middle of the semester will not receive an activity award, Strauss said.

The next Student Senate meeting will be held on Thursday, Aug. 14 in Student Center Rm. Hilberry AB.

Shawntay Lewis is the Arts & Entertainment editor for The South End. She can be reached at artsandentertainmenttse@gmail.com.