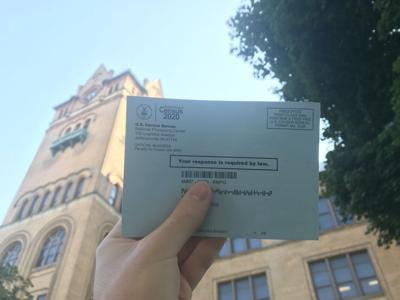 As a recent Wayne State graduate, I urge all WSU students to complete their Census form. The information you provide is confidential and will not be shared with any other government agency, member of law enforcement or insurance company.

Completing the Census is incredibly important for Detroiters and WSU students. The Census is outlined in the Constitution to count all people living in the country, not just citizens, to ensure accurate political representation.

It collects important demographic information that can be used for purposes like predicting the potential spread of communicable diseases or understanding how a city’s population has fluctuated through history. The Census count is also used to determine how the federal government will allocate $675 billion to the states and their local governments.

Public universities, like WSU, receive part of this federal funding and use it to directly benefit students in the form of federal student loans, federal research grants and campus improvements for labs, classrooms and university buildings. Additionally, WSU graduates pursue careers in many professions that also depend on this federal funding in fields like medicine, social work, nursing, research or public health.

The Census informs the apportionment of seats in Congress, dictating each state’s representation in the Electoral College.

This decade, Michigan could lose a congressional seat if too many Michiganders are missed in the Census count. Mayor Mike Duggan has stated that Detroit’s response rate for the last Census was the lowest for any major urban core city.

Detroit is also home to many of the hardest-to-count populations like people of color, homeless people, immigrants and college students. If too many Detroiters are missed in the Census this year, the ramifications for the city and the state will be felt for the entire decade to come.

Detroit 2020 Census Campaign Executive Director Victoria Kovari has been diligently working to prevent undercounting in the city. I met Kovari through my community organizing class last year where she explained that Detroit receives more federal dollars than other Michigan localities at roughly $5,000 per person per year. Most other cities only receive around $1,800.

I then worked with Kovari completing address verification for the master list of addresses in the Midwest. As the city has undergone significant transformation over the last ten years, many of the recorded addresses were of buildings that no longer existed while many of the addresses of newly developed housing units were missing.

After working with Kovari, I was inspired to launch a campus-wide Census Outreach Project through the student organization in which I was co-President —the Coalition of Community Social Workers. Our mission was to educate students about their essential role in securing a prosperous future and accurate representation for Detroit and Michigan, through completing the Census.

While researching for this campaign, I learned that universities in Michigan adopt an “administrative records count” enumeration method to account for the students living on campus. This method allows university administrative staff to send certain information for all on-campus students to the Census Bureau to ensure a complete count. Unfortunately, without explicit permission, this method cannot disclose race, ethnicity or gender demographics as this information is protected by the Family Educational Rights and Privacy Act.

WSU’s campus is proudly diverse. The administrative records count erases the unique traits of our student body. International students, people of color and gender minorities living on campus will not have these unique identity traits recorded in the 2020 Census. This method robs them of true representation —something that has long been fought for in our city and nation.

When asked if our university could work to better represent this population in the Census by providing a chance for students to give explicit permission for the university to disclose FERPA-protected information, an administrative staff member responded “this may be something to consider in the future, but I don't believe this is an area that could be implemented with the appropriate data security measures in the timeframe we have to complete the census.”

This response was sent on March 2. The updated Census timeline allows for universities to report until Sept. 2.

It is imperative that students living on campus in all Michigan universities see themselves represented in the Census. Detroit must also be accurately counted in the 2020 Census. To assist in making this happen, all students living in off-campus housing in Detroit from Fall 2019 to Spring 2020 must complete their Census form using their Detroit address. By doing this, $5,000 per year for ten years will be secured for every form completed and the threat of undercounting in Detroit will be that much lessened.

Colleen Elsbernd is a contributing writer for The South End. She can be reached at colleen.elsbernd@wayne.edu.