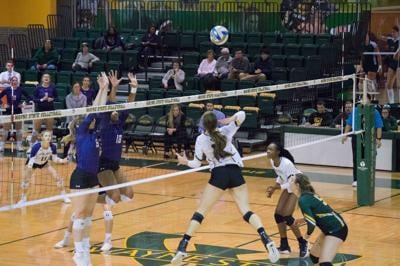 The Eagles posted a strong start to the second set, scoring 10 of the first 13 points in the period, and led 20-10 halfway through the set. AU was able to maintain their advantage throughout the stanza and evened the match with a 25-16 set victory.

Ashland started the third set in the same manner as they did the previous set, jumping out to a 7-2 lead. In this set, however, WSU responded by taking the next five points to even the match. Both teams traded points for most of the set before WSU scored three straight points to take a 22-19 lead. A kill by redshirt sophomore Lauren VanderWal and consecutive Eagles attacking errors ended the set and gave WSU a 2-1 match lead.

In the final set, WSU turned the tables on AU and raced out to an 8-0 lead. WSU possessed leads of 14-2 and 17-6 throughout the period and used two kills by Wagner to end the match and seal the win.

After the match Head Coach Tim Koth said the team’s early momentum in the opening set was a testament to what they focus on in game preparation.

“We call it ‘start on time,’” Koth said. “(We) make sure we start on time when the first whistle blows and we’re engaged.”

Junior Olivia Fike posted 13 kills and four blocks during the match. Koth said she capitalized on the extra swing opportunities throughout the match.

“She’s super athletic (and) statistically she’s been one of the better middles in the league (but) we haven’t had the opportunity to get her as many swings,” Koth said. “Today we were able to get her quite a few more swings and she was really aggressive.”

Wagner added her 13th double-double of the season with 14 kills and 15 digs, senior Madelyn Krenz tacked on 12 kills and VanderWal posted 11 kills to pace WSU on offense.

The win clinched a berth in the 2019 Great Lakes Intercollegiate Athletic Conference Tournament for WSU and improved their record to 14-11 on the season and 7-7 in conference play. WSU, currently sixth in tournament seeding, will look to improve its spot in the final two games of the regular season.

Next weekend WSU will take on two teams looking to solidify their spots in the postseason, beginning with their next match versus Davenport University, who currently holds the final spot in tournament seeding on Nov. 15.

Koth said he is completely confident in the team heading into the conference tournament.

“I don’t think if I were an opponent I would want to play (our team) right now. I think everyone knows we have some really athletic players,” Koth said.