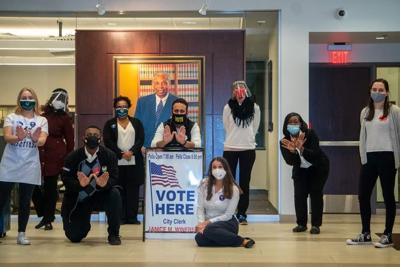 Election day came and went, with thousands of votes still to be counted in Michigan and across the country.

Wayne State University students and voters from Detroit’s 149 Precinct cast their ballots at the Damon J. Keith Center for Civil Rights in the WSU Law School.

WSU students and other volunteers worked the polls on election day, starting at 5 a.m., Clora said, with polls opening at 7 a.m. and closing at 8 p.m.

Poll workers were trained to make sure voters would be safe during the COVID-19 pandemic, Clora said. The training was administered by the Detroit Department of Elections, said Sailor Mayes, Senate Director of Government Affairs.

“The poll workers are trained to be able to mitigate any potential health risks as far as maintaining safety guidelines with PPE, six-feet tape markings, being able to be cognizant of how many people we’re letting in the space at one time,” Clora said. “Comfortably, I would say we could probably fit about 10 people in there to be able to have the space we need.”

Eriyon Adams, a junior majoring in information systems management, said he chose to vote in person to ensure that his vote counted, he said.

“I want to see my ballot go through the machine versus mailing and have the ballot get lost or people taking it,” Adams said.

Chidera Ubah, a fourth-year student majoring in biochemistry, said she feels that her vote is secure, but is concerned that the electoral college will not coincide with who the majority of voters selected.

“I am a little worried that the results may not be reflective of what the people actually want,” Ubah said. “So, I’m hoping for that as time progresses, that we get more secure with our elections and make sure that each vote is going towards the person that it should be.”

Voters should not be concerned about their ballots tampered with or going uncounted, Mayes said.

“As soon as you vote, your vote is very secure,” Mayes said. “We have a very secure process within the day of voting and even if you’re doing absentee voting.”

Poll workers were not responsible for counting the ballots afterward, said Mayes, as that is a separate position with different responsibilities. A Receiving Board —which is an independent board made up of members of each “major political party” — also inspect ballots to make sure they have not been tampered with, according to the Michigan Bureau of Elections.

Voters’ ballots go into a tabulator, Mayes said, which remains locked until the end of election night when all voters have left the precinct and the doors are locked.

Poll workers then remove the ballots and place them into a container, which is sealed and brought to the Receiving Board, along with the Poll Book and the Statement of Votes from each precinct after the polls close, Mayes said. If there are any signs of tampering with the box, poll workers immediately undergo questioning and are held accountable.

Wade Burson, a junior majoring in biochemistry and Spanish, said every citizen should have the chance to influence the government.

Photo and video by Quinn Banks, multimedia editor for The South End. He can be reached at multimediaeditortse@gmail.com.