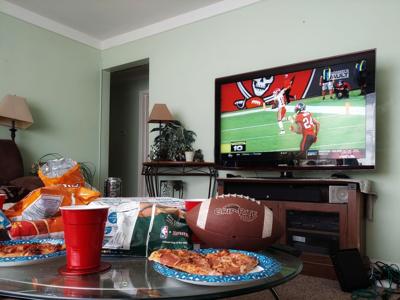 Ahead of Super Bowl Sunday on Feb. 7, public health experts are strongly advising avoiding in-person gatherings of multiple households in order to prevent the spread of COVID-19.

Super Bowl LV will look very different from previous Super Bowls due to the COVID-19 pandemic. There will be a reduced attendance of 25,000 people and 30,000 cardboard cutouts at Raymond James Stadium in Tampa, Florida according to the NFL.

For those that tuned out of this NFL season, the game will also look different from a visual perspective. Former Patriots Tom Brady and Rob Gronkowski will be suiting up for the Tampa Bay Buccaneers.

The Centers for Disease Control and Prevention recommends gathering virtually or in-person with members of the same household as the safest options to view the Super Bowl.

"We realize the Super Bowl is an event that is celebrated each year with parties and other gatherings. This year, our advice would be to stay home and watch it with your family,” Montgomery said. “It's best to avoid gatherings of friends in small areas like living rooms and dens, where it is almost impossible to socially distance.There is usually lots of food and beverages at Super Bowl parties so mask wearing would be sporadic at best.”

Multiple household gatherings are strongly discouraged by the CDC. If individuals do choose to hold such gatherings, outdoor is safer than indoor, though they still pose a risk. Indoor gatherings of multiple households pose the greatest public health risk and should be avoided.

Dr. Shmuel Shoham, associate professor of medicine at Johns Hopkins University and researcher involved with a national COVID-19 convalescent plasma study, said he celebrates the Super Bowl with his family every year. He understands the disappointment of not being able to gather in person this year.

"I'm empathic to it because we've been at this for a long time. I am a long time New England Patriots fan and I love my parents in law. We've historically had dinner with them every Friday night. My father-in-law always comes and watches the Super Bowl with us. Not this year though and we haven't had that dinner this year," Shoham said.

According to a survey from Seton Hall University, 27% of the 1,500 adults surveyed said they would watch the Super Bowl at an in-person party with others from outside their household.

For those attending multiple household indoor gatherings, it is crucial to follow CDC guidelines on wearing face masks, six feet of physical distance, handwashing, proper ventilation of the space, as well as using separate food, drinks and utensils for each household.

"This is where you feel like you have to draw the line for being safe. Risking catching COVID-19 just to watch Tom Brady play in his 10th Super Bowl? This is the same game, every year. For the most part you're not missing much by not having a party," Seng said.

Seng said he worried about the potential spread of COVID-19 due to in-person Super Bowl parties, though he expected the spread to be less severe than previous holidays.

"I think the CDC should at the very least recognize that this is going to be an issue. I think we're going to see a spike. It's not going to be anywhere close to the spikes that we saw with like Christmas or the Fourth of July," Seng said.

Shoham said while the spike post-Super Bowl will likely be less severe than the winter 2020 holiday season, the important point is to always remain vigilant against COVID-19.

“Even if one is more dangerous than the other, do you want to roll the dice with your father-in-law whose percentage is going to be much higher than others?” Shoham said.

Shoham said people should consider the potential cost that could befall them if they get infected with COVID-19 at an in-person party.

The rate of hospitalization and death among those in the 18-29 age group is lower by two and four times respectively, according to the CDC. However, following COVID-19 guidelines remains essential to protecting public health.

"I think people have to be responsible. If you want to roll the dice with your father-in-law whose percentage is going to be much higher than that one to two percent of dying, then you need to reflect how important this is to you. Actual people suffer. We had a guy earlier this week die and I don't know where they got COVID, but it could have been at a family gathering," Shoham said.