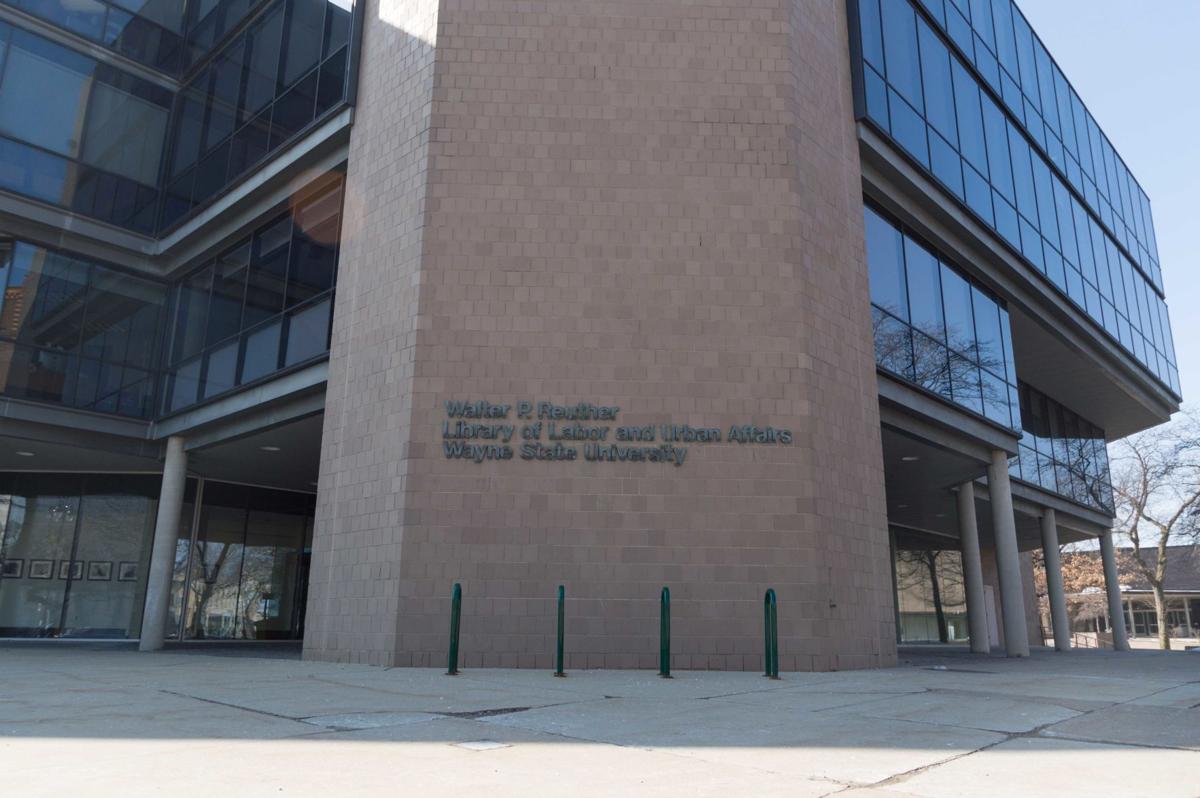 The Walter Reuther Library, where Stankrauff currently works as an archivist. 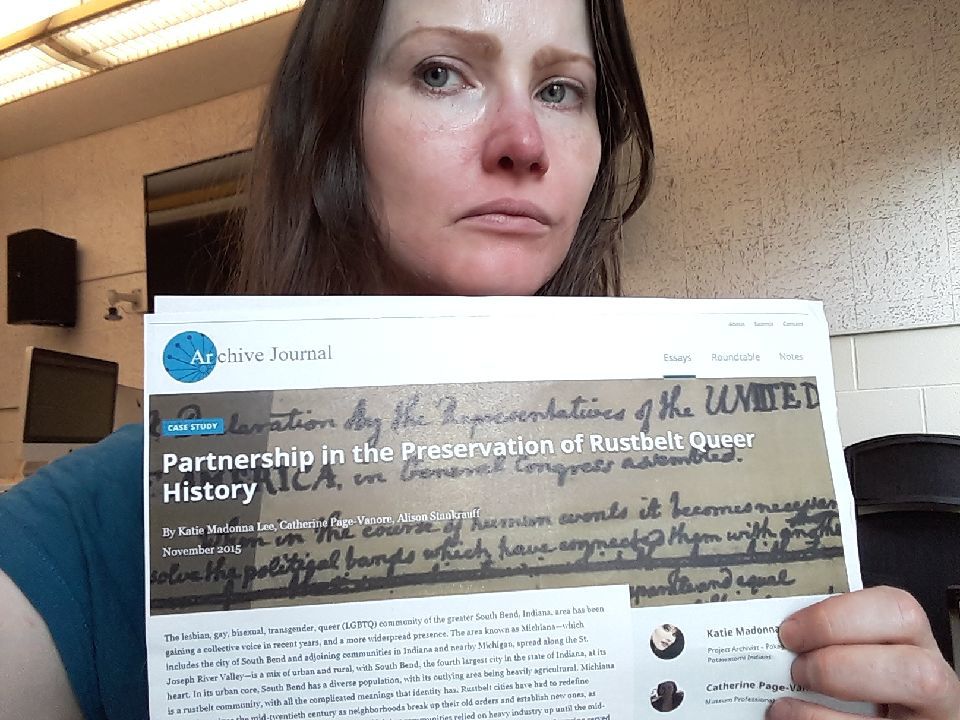 Lee holding the 2015 article she co-wrote. 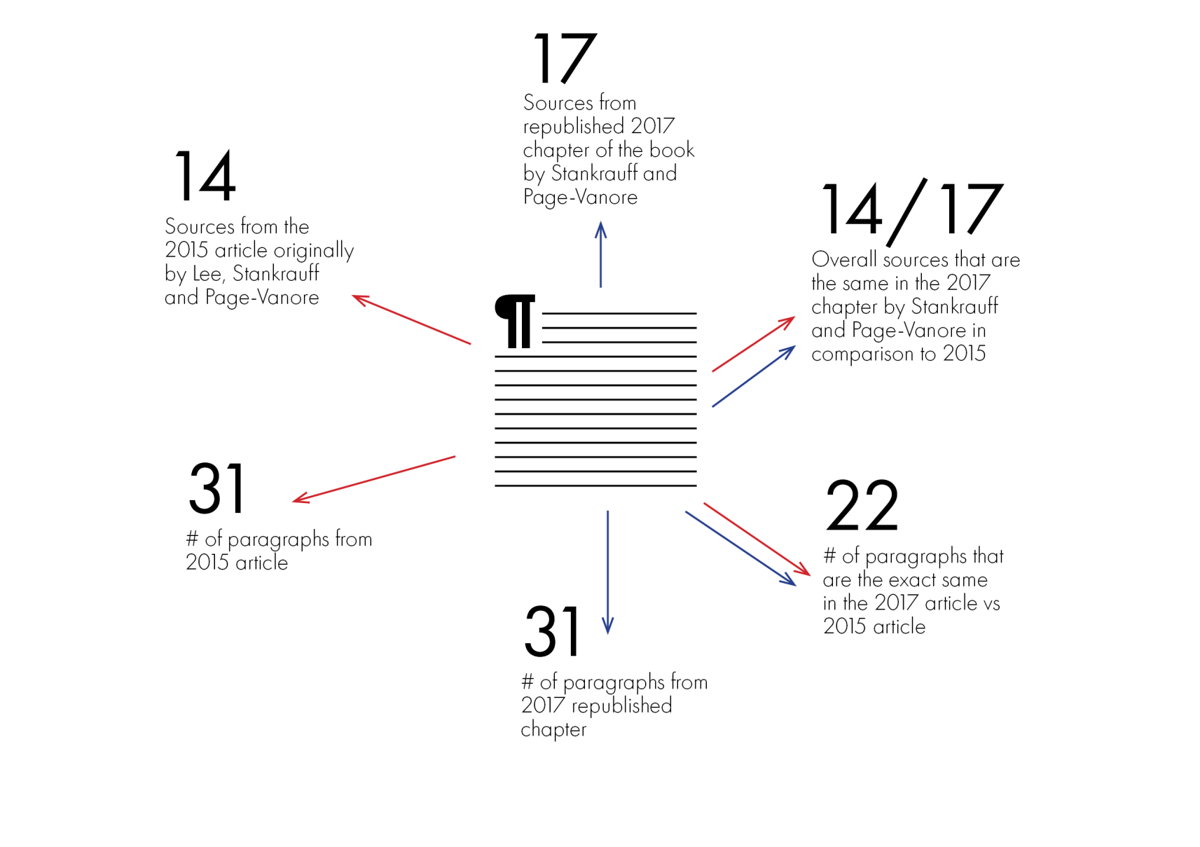 The South End analyzed the 2015-published article and the 2017-published book chapter. 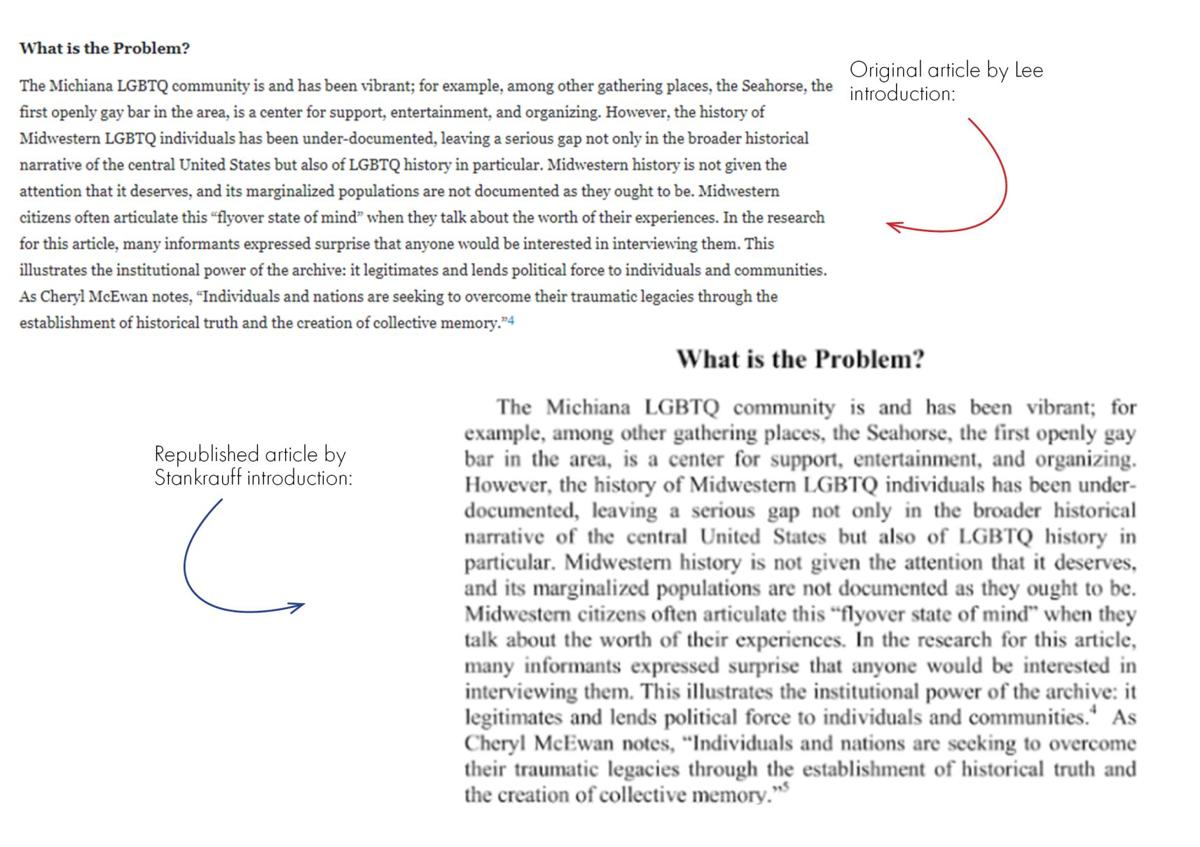 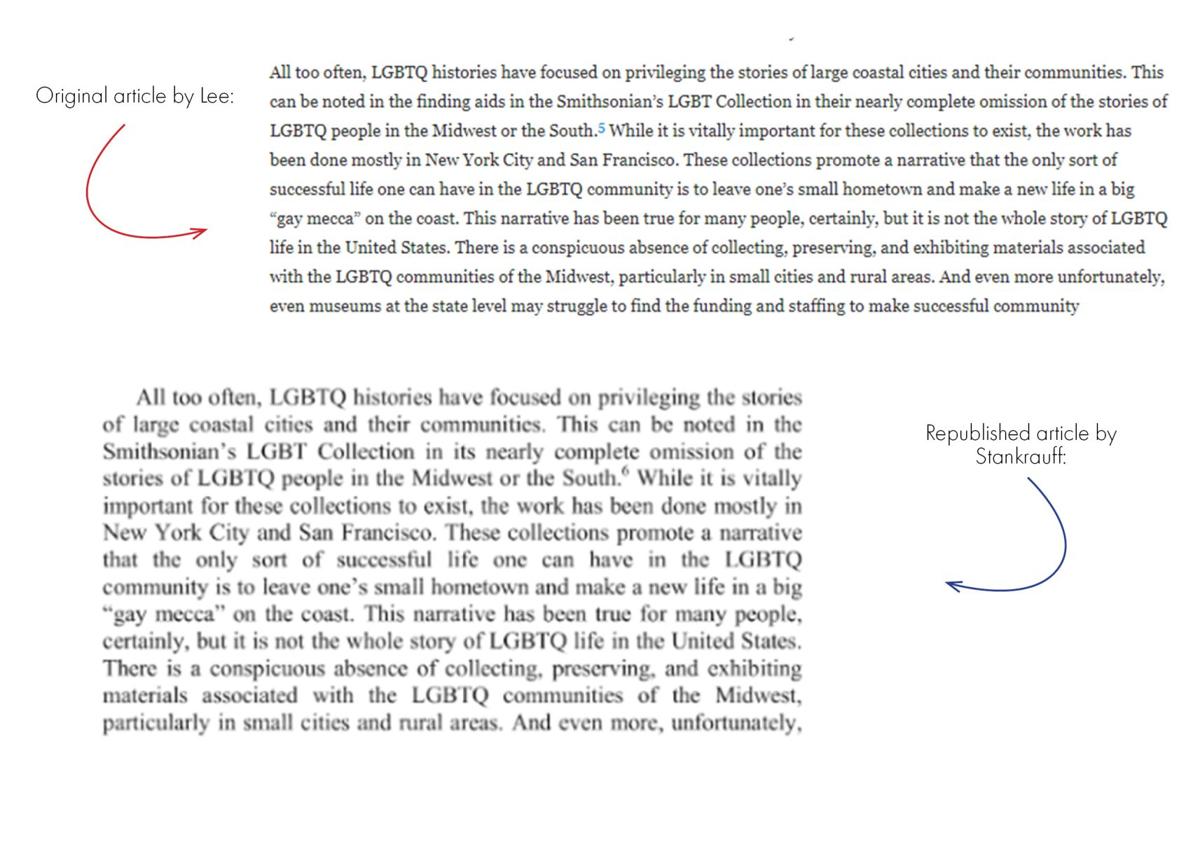 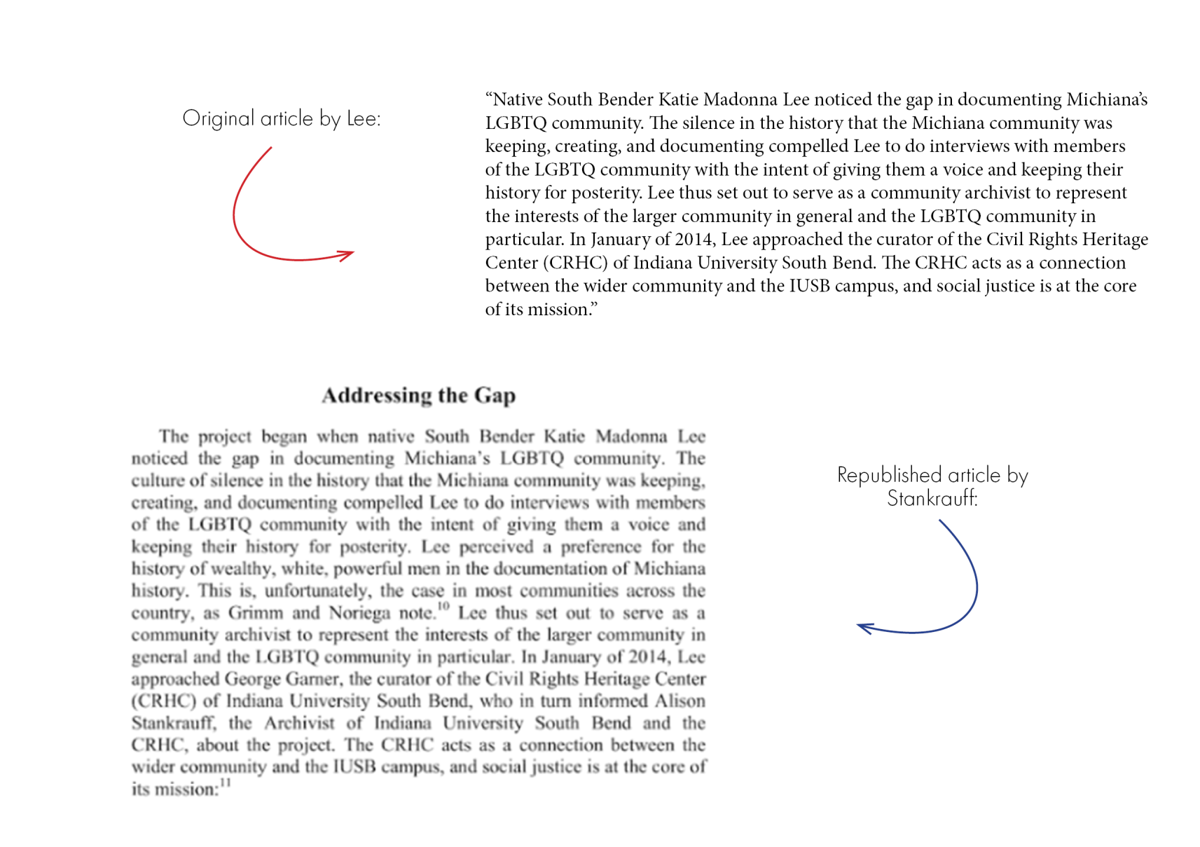 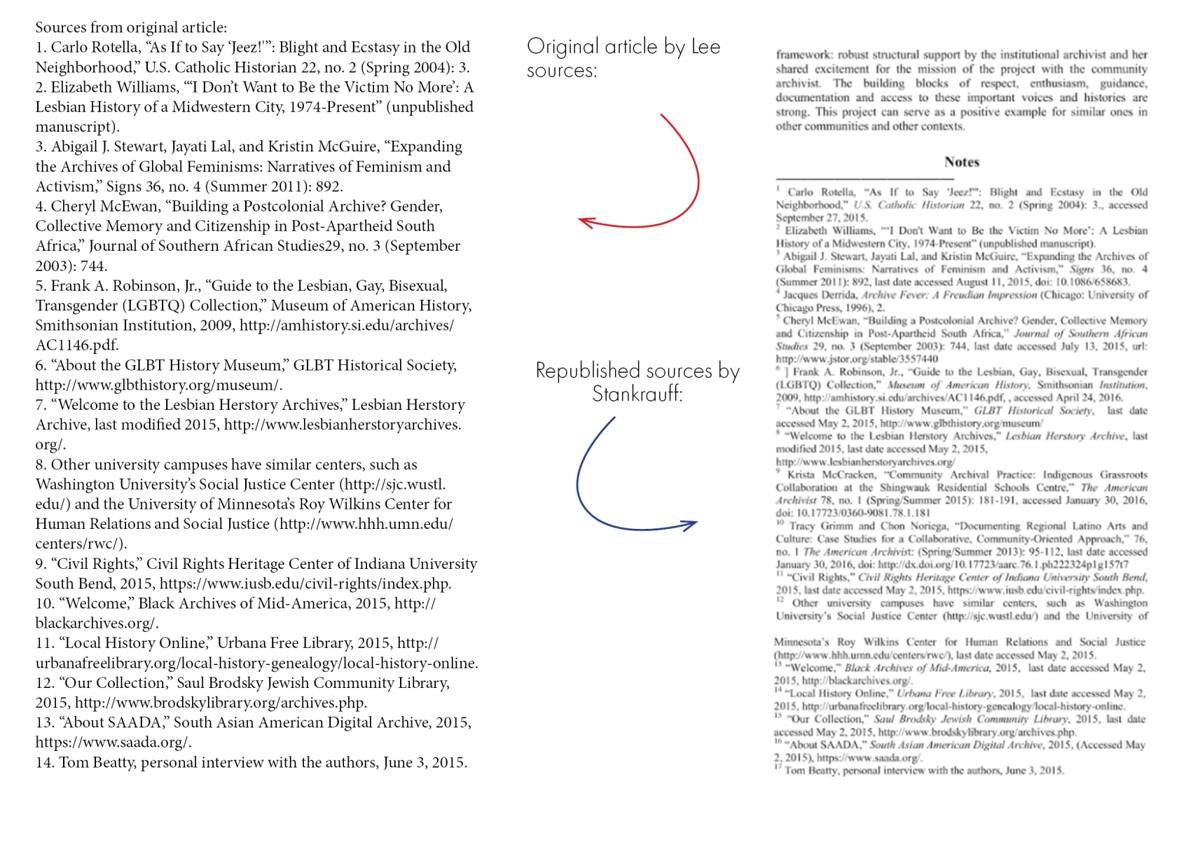 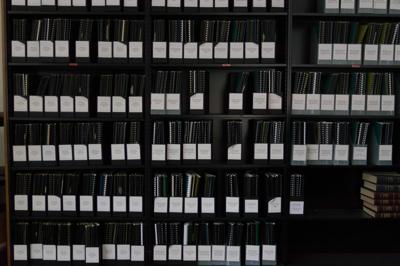 An Indiana University-South Bend master’s student is suing a Wayne State archivist for plagiarizing an article she co-wrote.

Katie Madonna Lee, a music graduate student at IU-South Bend, filed a lawsuit in January 2018 against Walter Reuther Library Archivist Alison Stankrauff for republishing Lee’s work without giving her credit in a chapter of a 2017 book titled, “The Role of Agency and Memory in Historical Understanding: Revolution, Reform, and Rebellion.”

The only credited authors of the book are Stankrauff and Catherine Page-Vanore, who are both former IU-South Bend employees.

The lawsuit filed in Indiana’s St. Joseph Circuit Court states, “Defendants Stankrauff and Page-Vanore knowingly or intentionally exerted unauthorized control over said article when it was published without Plaintiff’s knowledge or approval.” The lawsuit also claims Lee has not been given any benefits from her research or writings.

Lee worked on an anthology for the Civil Rights Heritage Center in South Bend, Indiana starting in 2013. During her time researching for the center, Lee cultivated information and wrote about punk nightlife, South Bend Central High School’s history, LGBTQ history and AIDS/HIV. Her collections were published in IU-South Bend’s archives.

“I was doing oral histories, retrieving documents and research while bringing it back to the archives,” Lee said. “I used my own family connections, gas mileage and own friends. So many people helped me when I was working on this project.”

In 2015, Lee, Stankrauff and Page-Vanore co-wrote an article published in Archives Journal called "Partnership in the Preservation of Rustbelt Queer History.”

All three women presented their article at Grand Valley State University’s annual Great Lakes History Conference. During the conference, the three of them were offered to write a chapter in the book, “The Role of Agency and Memory in Historical Understanding.”

Lee said Stankrauff informed her that three of Lee’s collections would be removed from the university’s archives shortly after the publishing offer. As a result, Lee said she resigned from her volunteering position under Stankrauff in May 2016.

Lee said she found out her work in “Partnership in the Preservation of Rustbelt Queer History” was being published in the 2017 book — “The Role of Agency and Memory in Historical Understanding: Revolution, Reform, and Rebellion” — without her name after being tagged in a Facebook post in May 2017.

“My Facebook page, The Seahorse (a gay bar Lee manages), was tagged by someone commenting on Alison’s (Stankrauff) post about how ‘Great it is to be published.’ I saw she was announcing a publication for ‘Partnership in the Preservation of Rustbelt Queer History,’ published in the book ‘The Role of Agency and Memory in Historical Understanding,’” Lee said in an email to The South End. “I purchased the book for $120.00 to found out that my name has been removed as a writer and contributor.”

Lee said she contacted administration from WSU Library System, WSU School of Information Sciences, the Detroit Area Library Network and the Reuther Archives to bring the issue to their attention.

“The justice I would like to see is the academic, museum and archive community respond to this matter appropriately,” Lee said.

WSU Director of Communications Matt Lockwood said, “The personal dispute (Stankruaff) is involved with arises out of events from before she came here. We are not in a position to comment.”

The official court counterclaim argues Stankrauff and Page-Vanore’s chapter in the 2017 book is different from the 2015 article co-authored with Lee.

Lee said she met with library officials from the University of Notre Dame library network, who told Lee the republished article in the book compared with the original article was undoubtedly plagiarism.

“It’s a very depressing and psychologically dehumanizing situation to be around a community that treats us like this,” Lee said. “They (Stankrauff and Page-Vanore) only said they would apologize if I kept this confidential. That’s not an apology.” 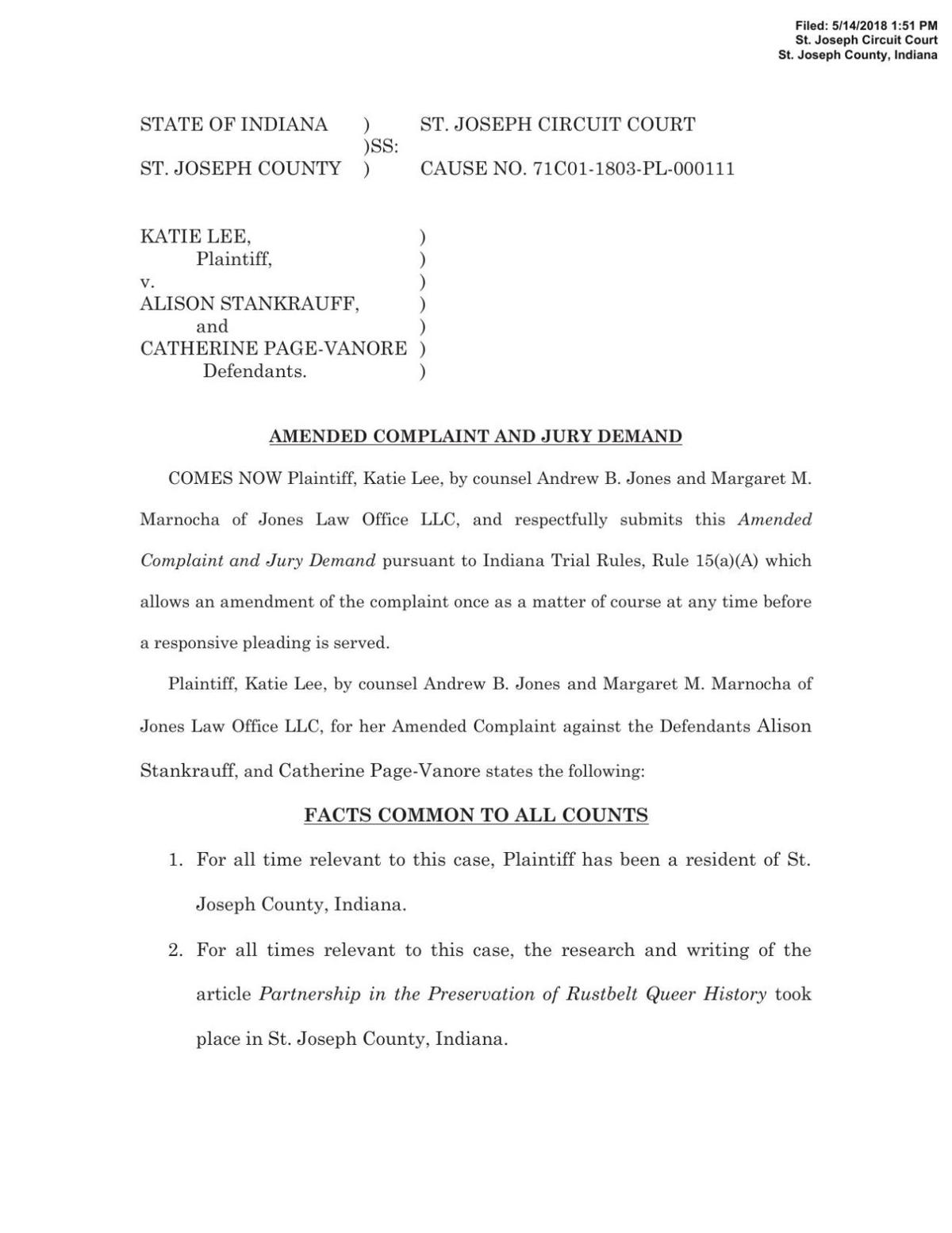 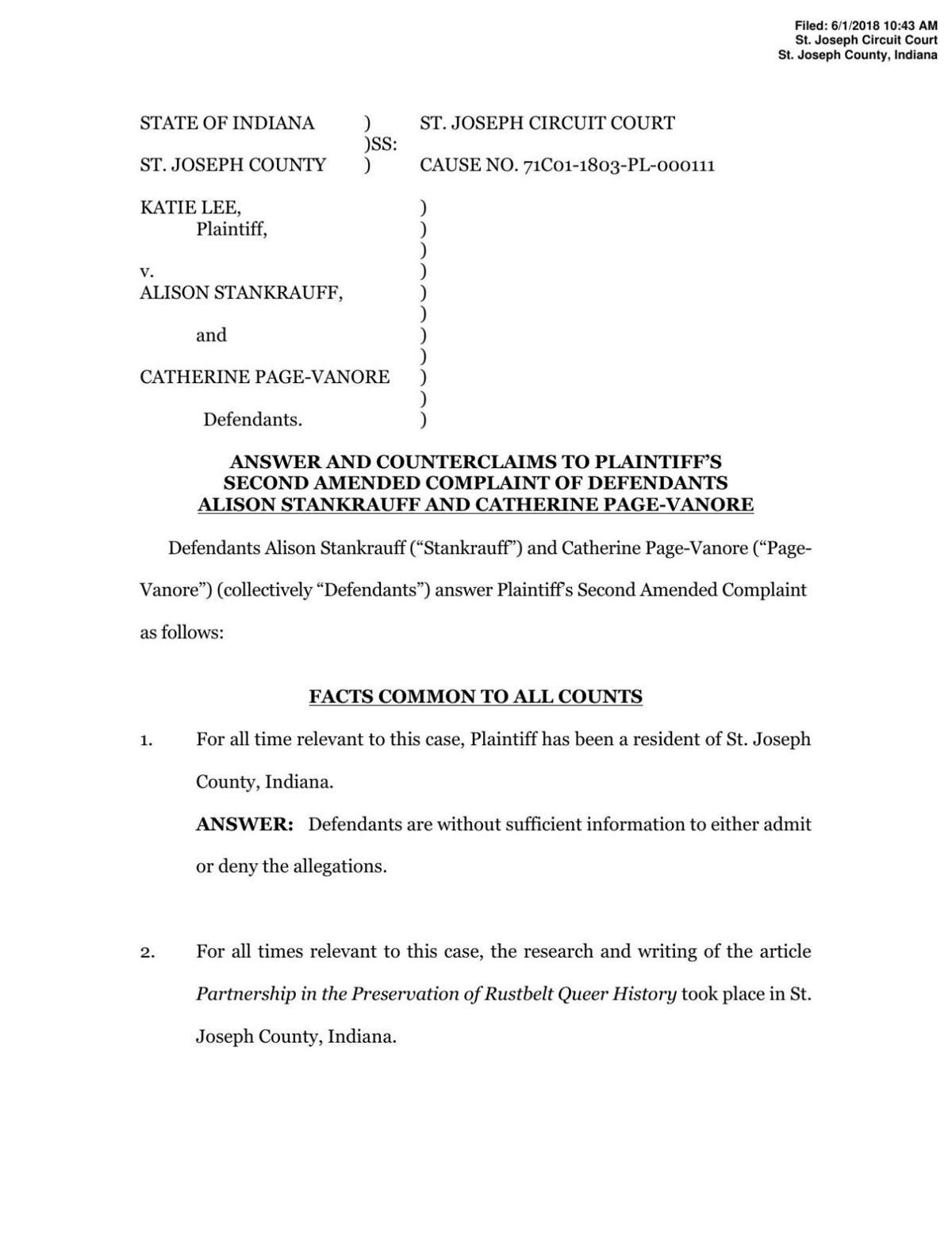 Susana Hernandez is The South End’s WSU Board of Governors and campus housing reporter. She can be reached at susana.hernandez@wayne.edu.