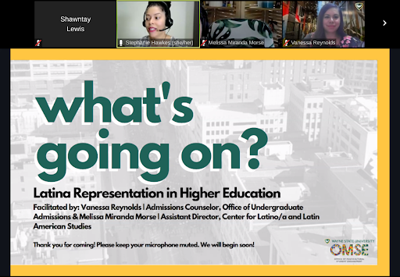 Editor's Note: This article has been updated to correct a factual error. A previous version of this article erroneously identified Claude Steele as Gregory Steele.

The virtual event is part of OMSE'S "What’s Going On?" series about diversity and inclusion on campus, said OMSE Assistant Director Stephanie Hawkes.

Panelists discussed a lack of Latina representation in the education field and the significance of having a Latina mentor.

A Latina faculty or staff member who helps to guide Latina students through the challenges of college, culture and life is considered a mentor, Hawkes said.

“As a scholar, (Claude) Steele did a study at the University of Michigan, and he actually noticed how when students walk into the classroom, he will notice that students will look around the room to see students and look like them,” said Vanessa Reynolds, admissions counselor and Latinx Faculty and Staff Association member. “And if they did not look like them, you know, they would pretty much stay away. But as we've had and read, research shows that representation matters. There is also a need for more Latina/Latino mentors, specifically Latina mentors.”

When there are Latino faculty and staff on college campuses, they are a small percentage in contrast to Latino student populations, according to Reynolds' research.

According to the Office of Institutional Research and Analysis, Latino students make up 5.5% of the total population at WSU as of fall 2020, while Latino faculty and staff are 3.2%.

Nationwide, Latinos make up 18.5% of the population, according to the U.S. Census Bureau. The U.S. Latino student population has increased significantly in recent years.

Panelists discussed how WSU can increase the number of Latina representation and mentors on campus.

Progress has been made, Reynolds said. The Latinx Student Association, Center for Latino/a and Latin American Studies, and LFSA are working to increase overall Latina representation at WSU.

“We take it upon ourselves to improve things on campus,” Miranda Morse said. “We organized the Latinx Faculty and Staff Association in 2017 and launched it in 2018. And in the last two and a half years, we’ve done a lot on campus.”

Latina faculty and staff in the LFSA have a strong base on campus and for the Detroit Latino community, said Spanish Lecturer Roxana Zuniga.

“Recruit, retain, mentor, and support those of us who are already here,” Sepúlveda said. “Those are just four simple steps, I think it can be done.”